Comparisons to Lionsgate and Summit's other YA fare, "Twilight" and "The Hunger Games," more than justified 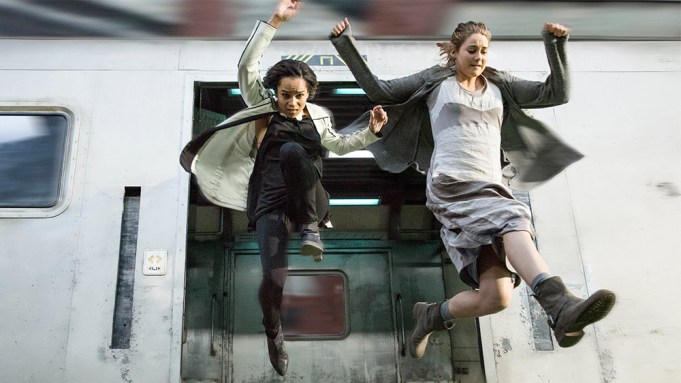 The inevitable comparisons of “Divergent” to its kin “Twilight” and “The Hunger Games” may not be premature, as the film, bowing March 21, is on track to open in the low-$50 millions.

The film’s first tracking report, released Thursday, indicates that the sci-fi adventure could meet early estimates of a $175 million total domestic gross. Given that the first “Twilight” movie had a $70 million opening weekend (with help from a Thanksgiving weekend berth), Lionsgate and Summit may have yet another hit young adult movie.

However, the tracking numbers are a far cry from the first “Hunger Games” film, which opened at $152 million. Together, the two franchises have grossed almost $5 billion globally so far.

The studio has already scheduled two additional “Divergent” installments, “Insurgent” and “Allegiant.” The three films are each slated a year apart, with the final two hitting theaters in March 2015 and March 2016. The company hasn’t announced whether it’s splitting the final chapter into two parts, à la “The Twilight Saga: Breaking Dawn” and “Hunger Games: Mockingjay.”

However, other recent supernatural YA-adaptations, including “The Host” (based on a novel penned by “Twilight” author Stephanie Meyer), “Mortal Instruments: City of Bones,” “Beautiful Creatures,” “Ender’s Game” and most recently, “Vampire Academy,” suffered at the B.O. so basing films on YA books isn’t fullproof. While a “Mortal Instruments” sequel is in the works, the future of the “Ender’s Game” franchise remains uncertain.

“Divergent” stars Shailene Woodley and Ansel Elgort will also appear in another book adaptation, “The Fault in Our Stars,” in June. Theo James plays the co-lead in “Divergent.”

With more than three weeks to go before its wide release (in more than 3,500 theaters), there’s room for these already strong numbers to grow. As expected, the movie, which is based on Veronica Roth’s best-selling novels and directed by Neil Burger, is tracking extremely well with teen girls. There’s “mild” interest from other demographics.

The movie cost $85 million to make, but Summit nabbed $65 million in international pre-sales, leaving only $20 million in production costs. Lionsgate plans to invest an additional $40 million in U.S. marketing.

Tickets go on sale on March 4.