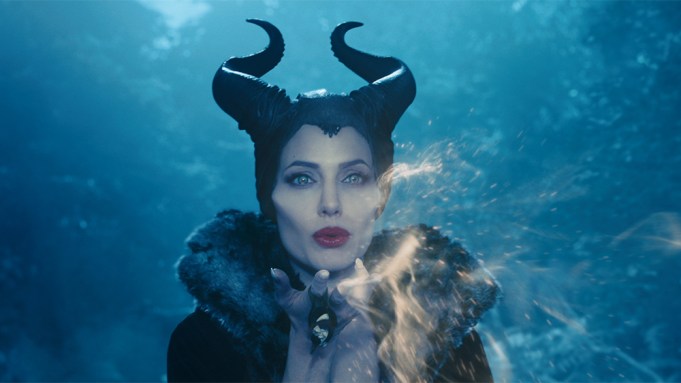 The Walt Disney Studios release is on pace to hit $60 million when it opens domestically in 3,948 theaters on Friday, the majority of them offering 3D screenings. If tracking holds, it will mark the highest-grossing debut in Jolie’s live-action career, topping the $50.9 million earned by “Wanted” when it launched in 2008.

The $180 million-budgeted fantasy represents a big bet on Jolie’s star power. The film’s advertising features the actress front-and-center, and the movie gives her a juicy part, along with the opportunity to humanize the villain from “Sleeping Beauty.”

“It’s Angelina Jolie in one of the most iconic roles she’s ever played and may ever play,” said Dave Hollis, Walt Disney Studios’ executive vice president of theatrical distribution. “Angelina in this part is a big part of why audiences will come out this weekend.”

Jolie may be one of the few actors in Hollywood whose name above the title can lift films such as “Salt” and “Wanted” into hit territory — though not even combining her star wattage with that of Johnny Depp could rescue “The Tourist.” Still, she faces competition from a comic multihyphenate.

Seth MacFarlane, whose work creating “Family Guy” and “Ted” has helped define modern humor, steps in front of the camera with his first starring role in “A Million Ways to Die in the West.” The R-rated comic Western aims to be a modern-day “Blazing Saddles,” with more raunch, gore and even a “Back to the Future Part III” reference, when it opens in 3,152 theaters.

Universal, which co-financed the $40 million film with Media Rights Capital, has had success tapping into the adult comedy market. The studio distributed “Ted” and scored a hit with this month’s “Neighbors.” The Seth Rogen-Zac Efron comedy debuted to nearly $50 million, but that film benefited from less competition in the marketplace and stronger reviews. A debut of about $25 million seems likely for “A Million Ways to Die in the West.”

Universal will also try to see if MacFarlane’s humor will travel, opening the film day-and-date with the U.S. in 22 territories.

Then there’s last weekend’s box office champion, “X-Men: Days of Future Past.” The mutant sequel was popular with audiences and critics, earning an A CinemaScore rating, which could signal that it will continue to do robust business in its second week of release.

However, “X-Men” films tend to be front-loaded, with other entries in the series dropping from 53% to nearly 70% in their second weekends. Analysts project that the “X-Men” film should make about $40 million when the dust settles on the weekend.

Although summer releases tend to burn hot and fast, “Maleficent” could show more endurance. It has a two-week jump on “How to Train Your Dragon 2,” and schools have begun to let out for summer, making it the de facto choice for parents looking for age-appropriate entertainment.

“There really are not a lot of family titles,” said Paul Dergarabedian, senior media analyst at Rentrak. “There’s a lot of comedy out there, and ‘Godzilla,’ ‘X-Men’ and ‘Spider-Man 2’ are all vying for the same audience. This hits the sweet spot of an audience that’s underserved.”

“Maleficent” emerges from the same playbook as “Oz the Great and Powerful” and “Alice in Wonderland,” sharing a producer in Joe Roth with those fantasy adventures. However, it debuts in the heat of summer, meaning it will have a tough time matching “Oz the Great and Powerful’s” $79.1 million bow or “Alice in Wonderland’s” $116 million opening. Both of those films benefited from opening in March.

Disney isn’t putting all its bets on summer school breaks in the U.S. The studio is planning an ambitious international rollout and will deploy “Maleficent” in 13,011 theaters across 46 countries, representing about 75% of the total international footprint. The only major markets where it won’t open will be China, where it debuts on June 20, and Japan, where it hits on July 4.

But will the malevolent sorceress and her spindle-pricking curses prove too frightening for younger audiences? For his part, Hollis seemed to downplay any concerns that the picture will send nightmare-plagued kids scurrying into therapy. However, the spooky fantasy won’t play quite as broadly as “How to Train Your Dragon 2,” due in two weeks.

“Tonally, it strikes the right chord,” he said. “There are moments of intensity, but the response has been overwhelming when we’ve shown it to families with kids as young as five.”