Continue to Variety SKIP AD
You will be redirected back to your article in seconds
Mar 2, 2014 9:00pm PT

‘12 Years a Slave’ Takes Top Prize at the Oscars 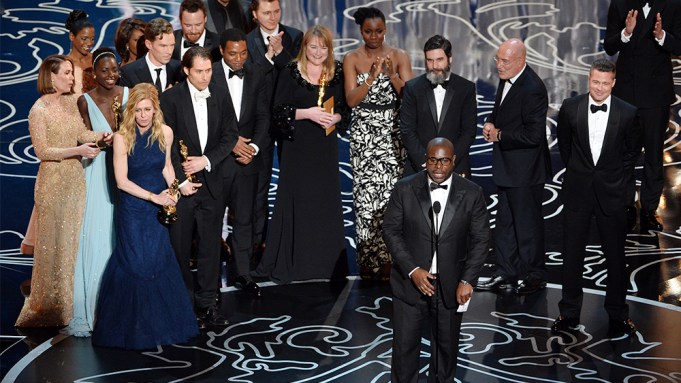 In a contest that held suspense up until the last minute, Fox Searchlight’s “12 Years a Slave” took the best-picture prize Sunday at the 86th Academy Awards and established a few Oscar records in the process. Winning three of its nine nominations, the film is the first best-picture win for a black producer (Steve McQueen, who also directed). That in itself is significant, but it’s got bigger implications: In 85 previous years, blacks have only won in a handful of categories, including acting (14 wins), screenplay (1 win), sound (four wins) and music (7 wins).

After the 2012 “Argo,” this is the second consecutive win for a film produced by top stars: Last year, it was George Clooney and Ben Affleck, among others; in this case, Brad Pitt, the second in this category after “Moneyball.” (He also has three acting noms.) It’s the second nom for Dede Gardner, the first for Jeremy Kleiner and Anthony Katagas, and the first for McQueen. It’s the second win in seven years for Searchlight, after the 2008 “Slumdog Millionaire.”

It was Blanchett’s second win in four nominations. and she joins 21 actors who have won in in both categories. Her win was expected, since she’d won nearly every other award, including SAG, Golden Globe and critics noms. But the Feb. 1 Woody Allen-Dylan Farrow flap cast a shadow over “Blue Jasmine,” and some wondered if the controversy would reduce her vote count.

Following a trail of acting prizes this season, McConaughey had an amazing year with other projects, notably HBO’s “True Detective,” and people loved the story of his 40-pound weight loss, as well as the fact that he helped the project get made after 20 years in limbo. Previously, 65 actors have won for playing real people, and he joins them with his work as homophobe-turned-AIDS-activist Ron Woodroof.

On his first nomination, John Ridley won the adapted-screenplay prize for “12 Years a Slave,” from Solomon Northup’s memoir. Ridley became only the second black person to win an Oscar in the writing category, after Geoffrey Fletcher for “Precious.”

Spike Jonze nabbed the original-screenplay trophy for Warner Bros.’ “Her,” which he also directed. Jonze was considered a front-runner, since he’d won the Writers Guild award, as well as a Golden Globe for the script. Jonze was a triple nominee this year, also up as a producer and songwriter for the film.

Best animated film went to Chris Buck, Jennifer Lee and Peter Del Vecho for Disney’s “Frozen,” while Kristen Anderson-Lopez and Robert Lopez won best song for the film’s “Let it Go.” Buck dedicated the award to his son who died in an accident before the movie came out, calling him a “guardian angel.” “Frozen” marks the first win for Disney Animation in the 13-year-old feature-animation category.

The In Memoriam segment is always popular with audiences, but this year’s segment, which concluded with Philip Seymour Hoffman, was controversial as well. There was a massive movement to get the Academy to include Sarah Jones, who was killed in February during a train accident while filming “Midnight Runner.” A mention of Jones was included at the end of the memorial segment, directing viewers to the Academy’s website.

The segment itself featured an intro by Glenn Close and was followed by Bette Midler singing “The Wind Beneath My Wings.”

The Oscar kudocast kicked off with a supporting actor win for Jared Leto for his performance as transgender AIDS patient Rayon in “Dallas Buyers Club.” The film saw another win for hair and makeup before McConaughey’s actor win. Leto had won nearly every award in the build-up to Oscars, including SAG, Golden Globe, Critics Choice and numerous critics groups. The film marked a mini-comeback for Leto, who had given up acting for seven years to concentrate on his work with his band 30 Seconds From Mars.

With her performance as Patsey in “12 Years a Slave,” Lupita Nyong’o landed the supporting actress prize, joining 15 individuals who previously won Oscars for their film debuts. The Kenyan-Mexican actress, who’s a Yale grad, joins 14 other black actors who’ve won Oscars, with the numbers increasing regularly — an encouraging sign for Academy execs who have been working hard to make sure the organization, the industry and the Oscars better reflect the world’s diversity.

Director Morgan Neville, Caitrin Rogers and the late Gil Friesen were trophied for the docu feature “20 Feet From Stardom,” a bittersweet look at backup and session singers. The film, directed by Neville and produced by Rogers and Friesen (who died in December 2012) is distributed in the U.S. by Radius-Weinstein Co.

“The Great Beauty” and “20 Feet From Stardom” were the first winners in those categories under the Academy’s revised voting system. Previously, a member had to show proof of having seen all five contenders before voting in that category. The Academy wanted to broaden the voting base, working on the honor system that the entire voting membership could vote, theoretically meaning the decision was made by thousands instead of hundreds. Purists were concerned that the winner would be the most popular. But the Academy mailed screeners of all the contenders to voters, to level the playing field. Certainly “20 Feet From Stardom” and “The Great Beauty” were the most popular with the public, easily outgrossing competitors with respective $4.8 million and $11.6 million.

The hair and makeup winners were Adruitha Lee and Robin Mathews for “Dallas Buyer’s Club,” who created the transvestite look for Leto’s character on a shoestring $250 budget.

Catherine Martin was a two-time winner for “The Great Gatsby,” for both Production Design (with Beverley Dunn on Set Decoration) and for Costume Design. Martin thanked her husband, the pic’s director Baz Luhrmann, “He makes it all possible.”

Overall, it was an energetic awards season, with intense campaigning because there were so few sure bets. In September, some awards pundits declared the race was already over, referring to either Fox Searchlight’s “12 Years a Slave” or Warner Bros.’ “Gravity.” But it wasn’t clear sailing for either film, as other strong pics entered the race, including Sony’s “American Hustle,” Paramount’s “The Wolf of Wall Street” and dark-horse contenders including “Philomena.”

The Producers Guild event Jan. 19 seemed to renew the September predictions, as “12 Years” and “Gravity” had an unprecedented tie as best pic. By the time Oscar balloting closed, it seemed like all awards pundits were back where they started, with “12 Years” and “Gravity.” On Sunday, we all found out which film won, but what came in second and third? We’ll never know.

The Academy of Motion Picture Arts & Sciences doesn’t disclose tallies, but this year more than ever, one wishes the PricewaterhouseCoopers people would open up the books. In a close race, with many worthwhile contenders, it would be fascinating to see which film got how many votes.

Ellen DeGeneres proved a genial host and the high point may have been her all-star selfie that broke Twitter records. After Seth McFarland’s hosting last year which divided audiences, the general consensus was that DeGeneres was a “safe” choice for host. But given legislation that was under consideration in Arizona, ongoing battles over gay marriage, and the countries overseas with strong anti-gay legislation, she could actually be seen as a bold choice.

Oscar’s 24 categories this year saw nominations for 42 films, representing the work of 203 individuals.

The awards were handed out Sunday at the Dolby Theatre in Hollywood. The show was produced by Craig Zadan and Neil Meron, their second consecutive year in that role.