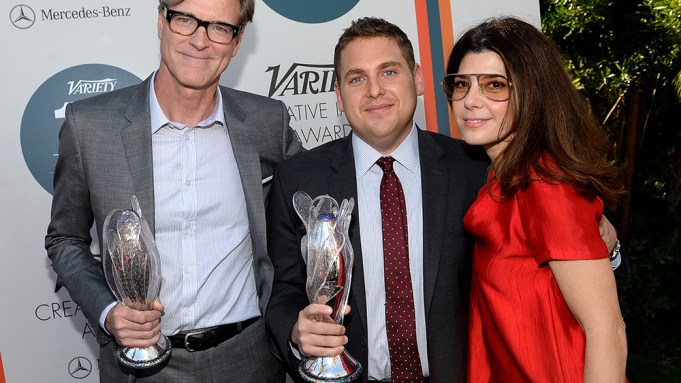 Jonah Hill said naysayers have misunderstood the lesson of “Wolf of Wall Street” at Variety’s Creative Impact Awards and 10 Directors to Watch brunch honoring him at the Parker Palm Springs on Sunday.

“I personally take away the message from the film that this behavior, this lifestyle, leads to a very bad ending,” the actor said. “I think the movie is not glorifying this behavior, it is showing that it leads to bad places whether their judicial punishment doesn’t reflect that is one thing. Where your life ends up, who you are as a person, is another.”

Marisa Tomei, who introduced Hill, Variety’s Creative Impact in Acting honoree, called him, “my friend, a sweetie pie and who’s handsome,” adding, “he can make us laugh, but he has got the craft to back it up.”

“Saving Mr. Banks” director John Lee Hancock, who accepted the Creative Impact in Directing award, had this advice for up-and-coming helmers: “What part is Colin Farrell going to play? That is always a good harbinger of success,” referring to the thesp who intro’ed him.

Hancock said he’s not competitive and reflecting on the gala said 2013 was a good year for film. “I want all these films to do well. I do adult dramas and I want another job.”

Sharing a moment from the previous night when he presented the composing kudo to Thomas Newman, Hancock said he had a tough time with the Teleprompter, which gave him “a crick in the neck.