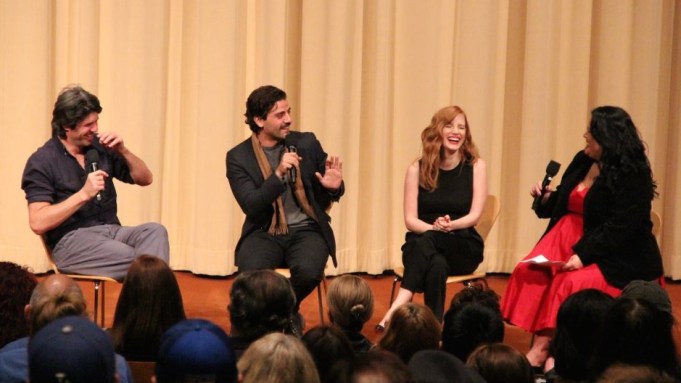 On Monday, Nov. 17, the filmmaker and stars of “A Most Violent Year” spoke to a SAG audience following a screening of the film. Moderated by Variety’s Jenelle Riley, the conversation was filmed by SAG Foundation, the non-profit arm of SAG and marked the first time actors Jessica Chastain and Oscar Isaac spoke together at length about the film. They were joined by writer-director J.C. Chandor.

“A Most Violent Year” tells the story of Abel Morales (Isaac), an immigrant in 1981 struggling to grow his business while being investigated by the FBI and dealing with corrupt competitors. Chastain plays his tough-as-nails wife, who happens to have a mob connection.

Chastain not only stars in the film, she was instrumental in getting Chandor to cast Isaac, who she attended the Juilliard School with. “There was another actor attached for awhile,” said Chastain, “But the right actor came on board.” Added Chandor, “Jessica started whispering about this guy to me and it was sort of meant to be. She was sort of acting as an agent.” To which Chastain quipped, “Where’s my 10 percent?”

Chastain also revealed that she sent a long email to Chandor endorsing Isaac–something that Isaac was not aware of until this Q&A.

In addition to talking about preparing for the film, the actors revealed their worst audition stories, both of which involved prominent actors who were not named. Watch the full video, which is free of spoilers for the film. “A Most Violent Year” hits theaters Dec. 31, 2014.