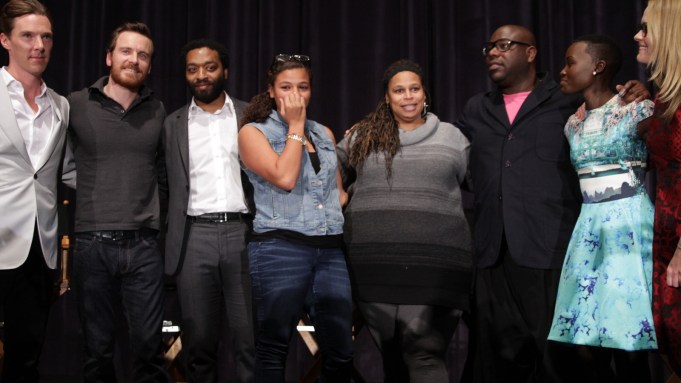 “12 Years a Slave” director Steve McQueen was pleasantly surprised to meet a pair of attendees at a special screening held Sat., Jan. 11—two descendants of Solomon Northup, the man who wrote the memoir upon which the film is based.

The day before the film took best picture at the Golden Globe Awards, the director was present with cast members Benedict Cumberbatch, Chiwetel Ejiofor, Michael Fassbender, Lupita Nyong’o and Sarah Paulson to speak to a SAG audience. The film, which is nominated for four SAG Awards, including outstanding ensemble, details how Northup, a free man, was kidnapped and sold into slavery. As the Q&A came to an end, McQueen spotted Michelle Linzy, the great-great-great granddaughter of Northup, who was attending with her 15-year-old daughter Milan, a SAG member.

McQueen pulled the two women onstage and introduced them to the audience, which was met with rapturous applause. Though they had previously seen the film at a private screening held for the family, it was the first time they had met any of the cast or McQueen. “You were simply amazing. Amazing,” Michelle said to Ejiofor, who plays Northup in the film. Michelle and a visibly tearful Milan stayed to take photos with the entire cast, who thanked them effusively for their kind words.

After the event, Michelle continued to praise the director and cast, saying the film “allowed me the opportunity to see, hear, feel and become immersed in my great-great-great grandfather’s struggle. Steve McQueen took the autobiography, gave it lifeblood and the actors used their incredible talent to give it a heart, a soul, a pulse, that I felt made the film genuinely authentic.”

Echoed Milan, “The first time I saw ‘12 Years a Slave,’ I had mixed feelings. First, I felt upset and scared that something like that happened to people. Second, I felt so happy that someone had finally brought my family’s images of our ancestor and his amazing story to life. Chiwetel Ejiofor portrayed my great-great-great-great grandfather exactly how I would’ve imagined him to be: smart, courageous—in addition to being emotionally and physically strong.”

There were many touching moments during the Q&A—Paulson became visibly choked up when McQueen praised her, saying, “As far as I’m concerned, she’s the Bette Davis of now. She’s such a raw, courageous, and tough. She only gets better each take after take after take.”

And Nyong’o, who beat out thousands of actresses to win the role of Patsey, admitted to feeling intimidated by her acclaimed cast mates until she rehearsed her first scene with Fassbender, who then said to her, “You are my peer.”

Cumberbatch revealed that he auditioned for the role of plantation owner Ford. “I was blown away by the story and amazed it was a true story I hadn’t heard about,” he noted. “And (McQueen) hadn’t seen ‘Sherlock,’ so it has nothing to do with that.” Asked if he had now watched Cumberbatch’s hit show, McQueen simply replied, “No,” eliciting laughter from the audience. He then added, “Just seeing Benedict’s audition tape was amazing. That was it. He was the guy.”

“12 Years a Slave” marks Fassbender’s third collaboration with McQueen, but the actor says he never assumed he would be given a role. “I loved the script and it was such an amazing, powerful, important story, I would love to play anything in it. Any part. I was hoping I would get the opportunity to play Epps, but I would never want to presume that would be the case, I just wanted to be a part of it,” he said.

As for his brutal character, Fassbender said he wanted to try and bring some humanity to the role. “He is a human being, we’re all human beings and we all have the capability of doing great things—both positive and negative. I just wanted to make sure that it was a human being and not some villainous character who was one-dimensional. Even if it was for a fraction for a second an audience member might recognize something in themselves, its more powerful.”

There was also much laughter, as Ejiofor and Fassbender recalled playing paintball while filming on location in New Orleans. And Paulson recalled getting her SAG card for an episode of “Law and Order,” saying, “I didn’t know when you were on film that you were allowed to move your body with your head. So everything I did I looked like I had a neck brace on.”

In addition to Cumberbatch, many of the actors expressed surprise over not having heard Northup’s story before the script came to them. Ejiofor said when he first read John Ridley’s screenplay, he assumed they had rewritten much of the book, “otherwise, I would have heard about the guy.” He added that he had never seen a story told from inside the slave experience. “I was intimidated by the story, the character, the weight of the responsibility. I had never seen a film like it before and had kind of come to the conclusion I never would and had kind of accepted it in a weird way. I felt immediately it was a story I was going to carry with me for my life.”