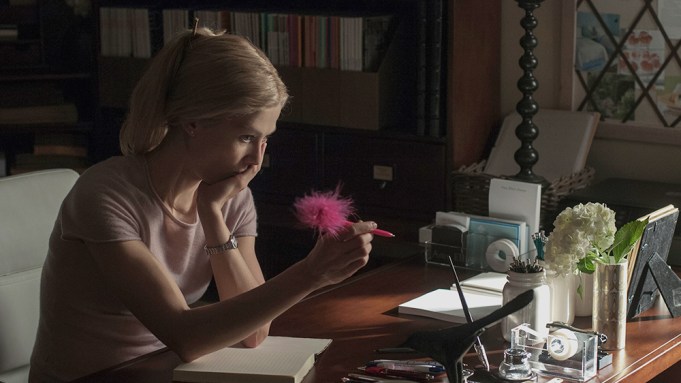 David Fincher and his top-notch team weave a memorable dark spell in “Gone Girl,” which could get Oscar nominations in multiple categories if smartly handled.

Rosamund Pike bursts into the best-actress race in the kind of showy role that awards voters love — going from sweet to steely, sympathetic to scary. Ben Affleck might be the biggest star in “Gone Girl,” but it’s Pike who will shine bright this awards season.

And that’s not a knock on Affleck.  The actor’s at his best in a complex role of widower-turned-suspect in “Gone Girl” and supporting turns by Tyler Perry, Neil Patrick Harris and Carrie Coon are also worthy of attention. However, those races are more crowded than the actress category, which is why Pike seems closer to a sure bet.

And the screenplay by first-timer Gillian Flynn (adapting her own best-seller) is sharp and original.

Fox’s big challenge is that awards voters for some reason are stingy in honoring genre films like suspense pics and comedies, and this is a combo of both (though the comedy is extremely dark). Fincher’s own “Seven” got only one Oscar nom and the terrific “Zodiac” scored an inexplicable zero.

In a similar noir vein, last year’s “Prisoners” from WB got one nomination.

Fox needs to remind viewers that mysteries, black comedies and crowd-pleasers are hard to pull off, and to emphasize the film’s originality and its heft. Under the trappings of a suspense film, it’s a sharp commentary on truth-vs-illusion, marriage and the media.

Awards recognition could depend on the reaction at the box office. Still, Fincher is respected and the book’s success will presumably build want-to-see attention, both with the public and awards voters.

The film’s opening-night berth at the New York Film Festival is yet another sign that the fest has become increasingly important in the awards-showcase game. That stepped-up role started with Fincher’s 2010 “Social Network.”