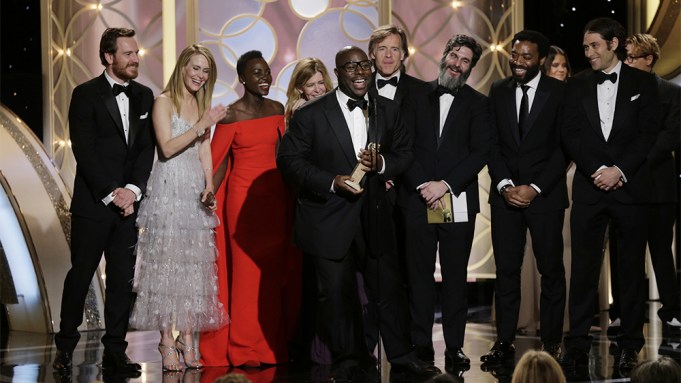 “12 Years a Slave” entered the Golden Globe Awards with seven nominations but walked away with only one win — the one that mattered, best motion picture drama.

Based on the 1853 memoir by Solomon Northup, a free man kidnapped and sold into slavery, the film has been considered an Oscar frontrunner since its debut at the Telluride Film Festival in August. Still, director Steve McQueen admitted to being surprised in his speech. “I’m going to forget someone. I’m so sorry. I wasn’t expecting this,” he said, before asking his cast to remind him of who else to thank.

On the red carpet prior to the show, McQueen praised his cast, which includes nominated actors Chiwetel Ejiofor, Michael Fassbender and Lupita Nyong’o. “I am in awe of actors and what they do,” he said. “I chose the best actors for the roles and they showed up and delivered every day. And not only did they turn out to be the most amazing actors, they are the best people.”

Backstage, McQueen was joined by his nominated actors and a visible teary Sarah Paulson (who McQueen compared to the great Bette Davis). Asked if he was thinking ahead to the Academy Awards, director Steve McQueen pointed out the award in his hand and said, “Well, I’m actually happy with this one right now.”

McQueen also talked about how wonderful the reception to the film has been. “I think that particularly period of history has been overlooked in a way,” he said. “I’m just so happy that the public has received the film so well in Europe and the United States. It’s so exhilarating, really.”

Biggest Snubs and Surprises at the Golden Globes

Ejiofor, who laughed after his name was mispronounced as he was being introduced backstage, said making the movie affected him personally. “It was always a story about human respect and human dignity and what those things really mean,” he said. “It’s had a huge impact on me, on my life, just telling the story and learning about the story.”

Fassbender, who has appeared in all of McQueen’s three films, offered effusive praise for the director backstage. “Steve changed my life,” Fassbender said. “He’s a wonderful storyteller, a wonderful leader, a wonderful human being. I love him to death.”