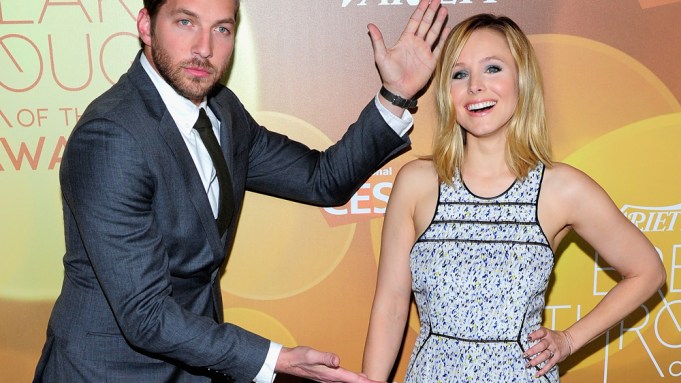 Variety’s Breakthrough of the Year Award recipients hit the red carpet Thursday night at the LVH Theater in Las Vegas during the Consumer Electronics Show.

“Veronica Mars” creator Rob Thomas thanked the fans of the series because “getting the film funded was nothing more than a miracle.” “Veronica Mars” stars Kristen Bell and Ryan Hansen have yet to see the bigscreen version of the show, which will be shown at Austin’s SXSW Fest and the PaleyFest2014. “The fact that the film got made is a breakthrough,” Bell said.

Singer Skylar Grey said she looked forward to a great beginning for 2014, where the Breakthrough Award is the first she’s received at an award show. “I’ve had a lot of pressure over the last few years,” she said. “There’s a lot more freedom to create now.”

Comic Amy Schumer, who will star in “Trainwreck,” the comedy she has been developing with Judd Apatow, said receiving the Breakthrough Award “has come through a lot of hard work. I’ve been doing stand-up for 10 years. The fact that it got noticed means so much to me. There are a lot of people that work so hard as me and do my get noticed.”

Will Forte, who is generating praise for his dramatic role in “Nebraska,” said he “got lucky” to get the part in the Alexander Payne pic and couldn’t thank the director enough. “It came out of nowhere,” said the actor known mostly for his comedic roles. “I know how rare of an opportunity it is to be in a movie like this,” Forte said. “I’m not going to get greedy.

Breakthrough Awards host Nick Cannon, who was promoting his new tablet at CES, said the awards honor people who “are being individuals and do things in their own way; when someone goes down their own path, people notice.”

“Extra” co-host Maria Menounos called herself “a geek” and is attracted to any device that makes the production process simpler, whether it’s on her series or through her digital broadcasting venture AfterBuzz. “Being at CES with your digital company is the place to be.”

“Burning Love” co-star Paul Scheer called it a breakthrough that his web series beat Grumpy Cat for the honor. “I know you’re out there Grumpy Cat, but we fucking beat you.”

Singer Janelle Monae, who performed at the show, said she felt “blessed and fortunate” to receive the Breakthrough Award in music and that this still feels like “the beginning of my career.” She said she was “privileged” to follow in the footsteps of icons like “Star Trek’s” Nichelle Nichols and astronaut Sally Ride and “do something as important as them.” Creating music is part of her DNA, she said. “I’m always working on music.”