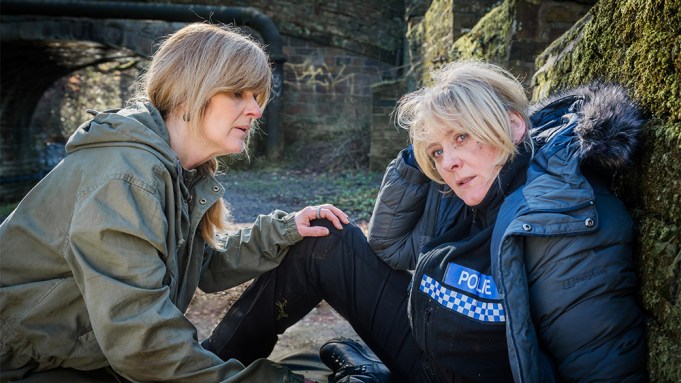 One of the boons of streaming services, hungry as these venues are for programming, has been to expand platforms for imports. So Netflix brings viewers “Happy Valley,” a terrifically off-kilter British thriller that reunites the “Last Tango in Halifax” team of writer Sally Wainwright and actress Sarah Lancashire. Set in a small rural town where drugs and drunkenness are common, the six-part production unfolds a botched kidnapping plot, thus bearing a closer kinship to the movie “Fargo” than, in some respects, the FX miniseries did. Tightly constructed, the hardy few that enter “Happy Valley” should find themselves quickly (and happily) hooked.

Lancashire plays a decidedly different heroine – a local police sergeant in her late 40s, raising the son of the daughter she tragically lost, with help from her sister (“Downton Abbey’s” Siobhan Finneran, unrecognizable here). Nor is she thrilled to learn that the man she blames for her daughter’s death, Tommy Lee Royce (James Norton), has just been released from prison.

Still, the main plot is set in a motion by a stammering, cash-strapped accountant (Steve Pemberton, simply superb), whose scheme to orchestrate the kidnapping of his boss’s grown daughter in order to put his own kid through school spirals terribly out of control. Naturally, this will not only involve Lancashire’s Catherine as a cop but, thanks to Tommy’s role in the plot, connect back into her personal torment as well.

Beyond getting caught up in the kidnapping, “Happy Valley” teems with clever details, like Catherine’s ongoing relationship with her now-married ex-husband (Derek Riddell), a reporter at the local newspaper about to lose his job because (sigh) the whole thing is shifting online.

It’s hard to do the show justice, honestly, based strictly on a description. But the characters are so sharply drawn and the situation so suspenseful that Netflix’s famous binge function will likely be put to good use here.

Already a success for BBC One, “Happy Valley” nearly runs out of gas before its final installment, but by then the plot has established enough wrinkles to carry across the finish line. And while many of the cast members will likely be unfamiliar on this side of the pond, the performances are first-rate from top to bottom, starting with Lancashire, who manages to convey toughness and vulnerability without drifting into cliché.

Netflix is understandably proud of the noise it’s made with original programming, but shrewd acquisitions are clearly a way to augment that rather limited slate. And with various players now crowding into the search for the European dramas that PBS overlooks – including BBC America, DirecTV, Sundance, Hulu and others – a discriminating crowd in the U.S. can be treated to more than just the requisite costume or detective fare.

That’s not to say the Brits are immune to rolling out clunkers. But the chance to take additional detours also paves the way to an off-the-beaten-track gem like “Happy Valley.”