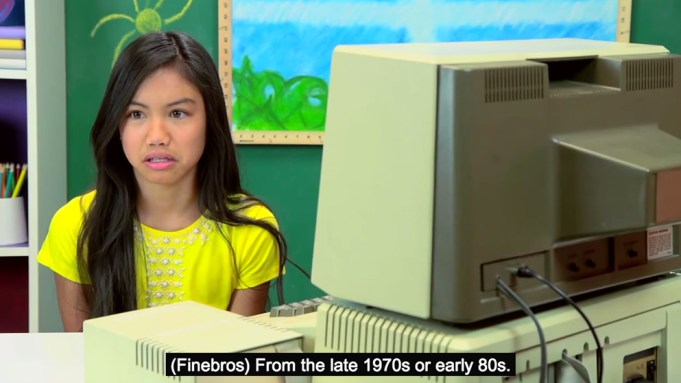 AMC Networks contracted with YouTube comedy stars Fine Bros. to produce a video promoting the cabler’s original series “Halt and Catch Fire” — and in less than 48 hours, the clip has racked up more than 4.5 million views.

The AMC series, a fictionalized account of the dawn of the PC era in the 1980s, premieres on TV next Sunday, June 1.

AMC and the Fine Bros. team worked together to develop the creative for the promo video, “Kids React to Old Computers,” modeled on the YouTubers’ “Kids React” franchise. The cable programmer paid for the sponsorship; terms of the deal weren’t disclosed.

In the video, kids are shown a DOS-era personal computer and floppy disks — and are dumbfounded about how to use the archaic equipment. The segment hit the No. 1 most-popular video on YouTube Monday.

In a separate digital marketing effort, AMC last week began streaming the first episode of “Halt and Catch Fire” on Yahoo’s Tumblr blogsite, the first time a TV show has premiered on the social network.

The Fine Bros. recently struck a deal with Viacom’s Nickelodeon, which ordered “ReactToThat” as a full series to air later in 2014. The brothers, Benny and Rafi Fine, are affiliated with YouTube multichannel network Fullscreen. Their YouTube channel has 8.4 million subscribers.