Is ‘Rabbids Invasion’ a TV Show or Game? Why Not Both? 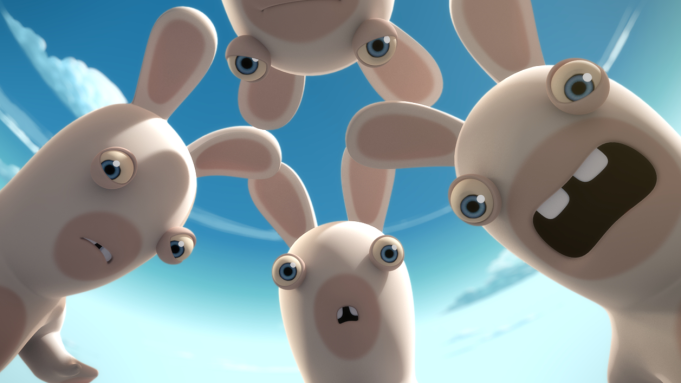 Ubisoft’s bug-eyed Rabbids are about to tell TV producers in Hollywood a lot without being able to say much at all.

The animated characters that communicate in gibberish and a lot of shouting are the stars of “Rabbids Invasion,” a series that has broken out as a hit on Nickelodeon over the past year and become Ubisoft Motion Pictures’ first success story since the film and TV arm of the French gamemaker was formed. The show airs in 25 countries.

But as it moves forward with new episodes for a second season, Ubisoft is about to blur the lines of what it takes to make a TV show and game.

In what could prove a clever cost-effective way of ringing more coin out of content for kids programmers, Ubisoft has taken existing episodes of “Rabbids Invasion” and will re-release them with mini games added to the same scenes in November.

The conceit is simple enough: As an episode plays, a group of viewers are asked to participate in a series of challenges that have each one replicate the poses of the Rabbids when frozen in place, draw mustaches on them, dance with the characters, hurl them across the screen, compete in an egg fight, or help them identify objects by pointing at the screen. Overall, there are more than 400 activities.

The game utilizes the Kinect motion sensor on Microsoft’s Xbox One and Xbox 360 videogame consoles and the camera on the PlayStation 4.

Other elements, like scoring and augmented reality features that put the Rabbids in the players’ rooms, are also added as rewards. There’s even the option to take selfies with the characters or shout their signature “bwaah!” at them through the Kinect’s voice controls.

Pulling off the project required some planning.

Developers of the game initially took finished episodes and tried to figure out ways to make them playable. Now, however, that same team works closely with the show’s producers to come up with play patterns as the show’s being written. Where it once took six months to turn seven minutes of an episode into a game, collaborating with series creators has dropped that time down to a month for two episodes.

“We now a pipeline in place,” said “Rabbids Invasion” producer Xavier Manzanares. “It was a new approach and way of working for us.”

Ubisoft initially introduced the “Rabbids Invasion” game at last year’s Electronic Entertainment Expo videogame confab, but opted to wait and see if the TV show would take off and become a hit before releasing the interactive version.

Producers had looked at other kids shows like “Dora the Explorer” and watched how the character asked viewers to point at different items on the screen. “We said, ‘This could be quite interesting,’ and started to add basic interactivity to the show,” Manzanares said.

Mini games couldn’t just be added into episodes, however.

Game designers at Ubisoft Paris, Ubisoft Casablanca and Ubisoft Barcelona had to learn how to add the right amount of gameplay to the series.

“We had to work on the basic elements of rhythm,” Manzanares said. “We had to learn how a show is done.”

The initial batch of test episodes “had a lot of gameplay all the time,” Manzanares said. “It broke the experience. We had to come up with a good balance of the show and the jokes so the viewer could see what was happening and then an activity to get viewers to stand up and participate. That was the biggest challenge for us.”

Should the “Rabbids Invasion” game become a hit, other childrens television producers could easily give their shows the same treatment and monetize the content in a similar fashion.

“Normally you watch a show, but now it’s a participatory experience,” which helps players connect with the characters on the screen in new ways.

The challenge of producing interactive TV often means coming up with scripts that would trigger new storylines if characters made certain moves on the screen.

What Ubisoft is doing with the “Rabbids Invasion” game, however, enables the company to “add interaction without having to completely redo the show,” Manzanares said.

But Ubisoft already had a leg up with its Rabbids.

“Rabbids Invasion” also is getting the licensing treatment, with books from Simon & Schuster Children’s Publishing, and MacFarlane Toys at Walmart and Toys R Us stores.

In addition to a new order of 26 half-hour episodes for Nickelodeon, co-produced with France Télévisions, Ubisoft is also developing a full-length animated feature at Sony set to star the Rabbids.