Ad has been viewed over 18 million times on YouTube alone 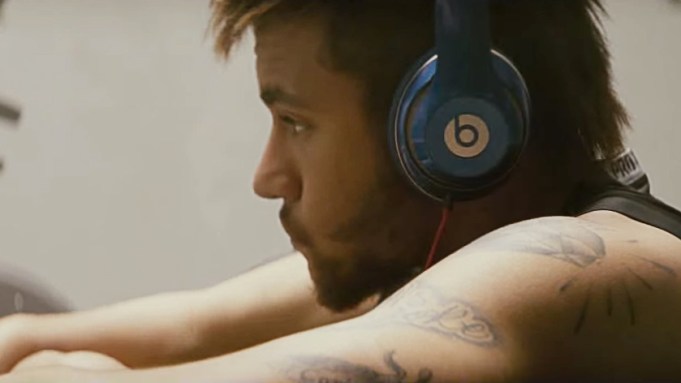 With every major sports event that comes along, Nike’s usually the one that comes out with an aspirational sports ad that’s meant to serve as a rousing anthem to bring the world together and inspire the athlete in all of us.

Not this time — at least not with Brazil’s World Cup.

This year, Beats has beaten Nike on the marketing field with its “The Game Before the Game” spot — a five-minute commercial for its Powerbeats 2 headphones that’s been viewed over 18 million times on YouTube alone since it debuted on the web June 5. Within just days it was at 10 million. Shorter versions of the ad also air on TV.

Beats knew that with the World Cup occurring every four years it would have an audience of billions tuning in. By casting some of soccer’s top stars, as well as NBA icons like LeBron James, it would find viewers of its own. But the ad had to be good, not a crass attempt to say, “Hey, we like soccer too. Wear our headphones.”

Instead, the ad, produced by agency RG/A, gets Beats into the branded entertainment space in a clever, creative way. It makes the company a storyteller rather just marketer, hard seller of merchandise we don’t need but now all of a sudden feel we must have. It’s what Apple, Beats’ new owner, has always done so well.

In “The Game Before the Game,” Beats pulls back the curtain on the pre-game rituals of soccer’s elite. Brazilian star Neymar Junior as he speaks to his father ahead before his country’s opening World Cup match, for example (see the spot above). Other guest stars include Germany’s Bastian Schweinsteiger and Mario Gotze; Spain’s Cesc Fabregas; Mexico’s Javier Hernández Balcázar; England’s Daniel Sturridge; and the Netherlands’ Robin van Persie.

By releasing the ad, directed by Nabil Elderkin, before the first soccer matches kicked off June 12, Beats was able to get ahead of the barrage of commercials tying in with the World Cup.

The campaign isn’t just meant to promote the new Powerbeats 2 headphones (pairs of its Solo2 and Studios are also featured in the ad); the company is also using the spot to push its Beats Music subscription streaming service, which is offering up a World Cup-themed playlist. The tracks include the commercial’s “Jungle,” by X Ambassadors & Jamie N Commons, as well as “Get Low” by Dillon Francis, and Justice’s “Genesis.”

But let’s not forget about Apple, which just acquired Beats for $3 billion last month. The acquisition already was considered a smart move, given Beats’ popularity among buyers of premium headphones. Apple needed an injection of cool at a time when its iPods and iPhones are starting to suffer from sequelitis.

Now with Beats, it has a powerful promoter as an ally. Apple already was known for its innovative advertising campaigns. With Beats, it now has another major player on its side with which it can try to rally consumers on the retail playing field.