Comedienne to create talk-show format and specials for streamer, after seven-year run on E! 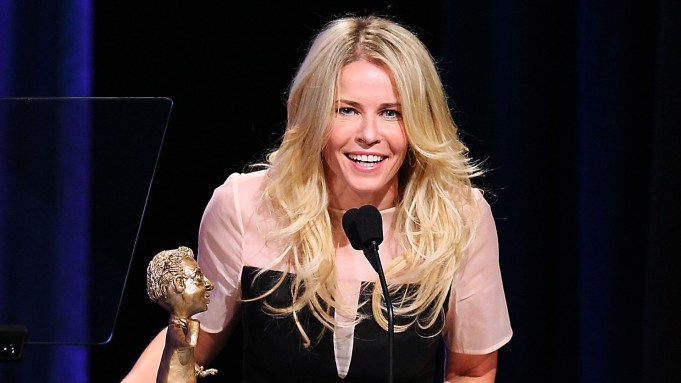 Chelsea Handler, after ending her seven-year run on E!, has inked a deal with Netflix to create a talk show for the Internet-video service slated to bow worldwide in early 2016.

Netflix said the new talk show, officially announced Thursday after months of negotiations, will feature an “updated format” that will encompasses the latenight comedienne’s unfiltered opinions on entertainment and culture as well as her signature guest interviews. The company didn’t say how frequently new episodes of the show would be rolled out.

Under the pact, Netflix also will premiere Handler’s first hour-long standup comedy performance on Oct. 10, based on her sold-out tour, “Uganda Be Kidding Me.” The special will be taped June 20 at Chicago’s Harris Theater.

In addition, next year Handler will create four docu-comedy specials exclusively for Netflix covering her exploration of subjects including politics, NASCAR, the NBA draft and Silicon Valley. Handler is producing the standup special, docu-comedy specials and new talk show along with her partners in Borderline Amazing, Tom Brunelle and Brad Wollack.

“If I was going to continue working in this industry, I knew I had to do something outside the box to keep myself interested,” Handler said in a statement. “I wanted to sit with the cool kids at lunch, so I approached Netflix to make sure they were as cool as I thought they were, and when I confirmed my suspicions, like with any other future lover, I made my move.”

Handler’s “Chelsea Lately” on NBCUniversal’s E! will end Aug. 26, after she had complained publicly that she was growing tired of the gig and seeking a change of pace. The show’s ratings have declined over the past several years.

“I’m more excited than I’ve been in a while, and the team at Netflix is the most forward thinking, alert group I’ve sat down with in ages. No offense to the ‘Shahs of Sunset,’” she added, referring to the reality series on Bravo.

Netflix chief content officer Ted Sarandos touted the pact as a chance to “reimagine” the genre. The company did not offer details about the format for the Handler show.

“The Internet has disrupted many of the conventions of traditional television and together with Chelsea Handler, Netflix is looking forward to reimagining the latenight talk show for the on-demand generation, starting with the latenight part.”

He added, “Chelsea has built a huge following on tour, on nightly TV and through her bestselling books, and we can’t wait to introduce her breathtakingly honest and irreverent voice to our global membership.”

With its originals strategy, Netflix initially skewed more toward dramas like “House of Cards” and “Orange Is the New Black,” while it revived cult-fave sitcom “Arrested Development” for a fourth season last year.

The subscription VOD leader now is adding more laffers to the mix, which include half-hour comedy series “Grace and Frankie” starring Jane Fonda and Lily Tomlin, slated to hit in summer 2015, and “BoJack Horseman,” an animated adult-themed show voiced by Will Arnett and Aaron Paul to debuts this August.