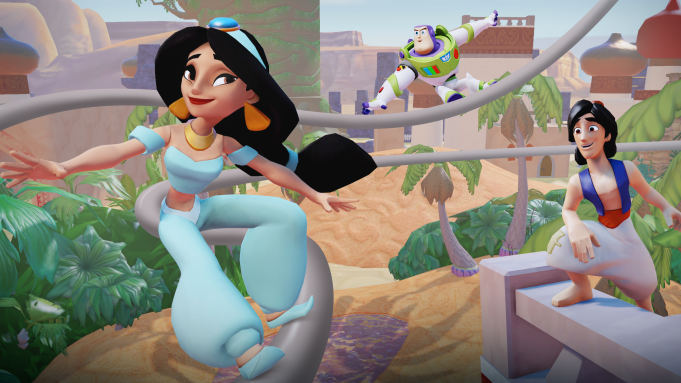 Aladdin and Princess Jasmine from Disney’s “Aladdin” will be added to the next version of “Disney Infinity” that hits store shelves in September.

The characters will be added to the game’s Toy Box mode along with elements associated with Aladdin, like his scimitar, magic lamp, Prince Ali costume, and flying carpet, as well as locations like the dunes and desert of Agrabah.

The addition of Aladdin is significant since he’s long been one of the most requested characters since “Disney Infinity” was released last year, Disney Interactive and the game’s executive producer John Vignocchi said.

Those 2 characters are fan favorites that YOU asked for! Your passion for all things @Disney make working on this so fun for our team.

However, Princess Jasmine is also notable, considering how the game has been embraced by not just young boys but a higher percentage of girls, as well, than normally play video games. She joins other Disney Princesses Rapunzel, “Brave’s” Merida, and “Frozen’s” Elsa and Anna.

“Disney Infinity” 2.0 will also include Marvel’s superheroes, including the Avengers and Guardians of the Galaxy.

While players won’t have to wait long for Aladdin (his figure be released this fall), Princess Jasmine won’t be available until early 2015, according to Disney Interactive.

Additional Disney and Marvel characters are expected to be announced in the coming months.