Disney has sold 3 million starter packs for game since August; generated over $500 million in revenue 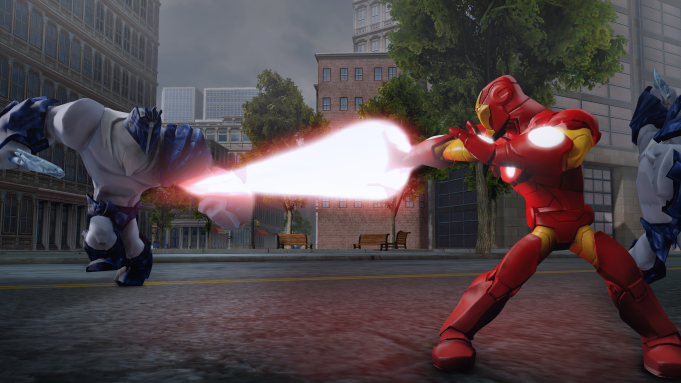 Six of Marvel’s superheroes will join Disney Infinity’s lineup of characters this fall.

After teasing the addition of Marvel’s Captain America to the game in a YouTube video, Disney and Marvel officially unveiled the star-spangled hero, as well as Iron Man, Thor, the Incredible Hulk, Black Widow and Hawkeye. See the figures that will be sold for the game, which the Mouse House is calling Disney Infinity 2.0, as well as them in action in the game below.

Disney Infinity has turned into a hit for Disney Interactive since the game launched in August. More than 3 million starter packs have been sold, and the game has generated over $500 million for the company. In fact, brisk sales have helped the game outgross rival properties like Activision’s similar “Skylanders” franchise, according to an NPD stat Disney Interactive president Jimmy Pitaro cited at a press event on Wednesday.

In fact, more than 20 new figures from across the Marvel universe will be added to Disney Infinity, including the characters from the upcoming “Guardians of the Galaxy,” which were briefly shown at the press event held inside Hollywood Cinerama Dome.

Event kicked off with a video of Samuel L. Jackson as Nick Fury, who introduced Clark Gregg, who was in character as Agent Coulson from “Marvel’s Agents of SHIELD” to open the character reveal.

“Bringing popular and iconic Marvel characters to the Disney Infinity platform truly takes this game to the next level,” said Jimmy Pitaro, president of Disney Interactive.

The Marvel characters will be featured in new games and storylines, written by Marvel Comics scribe Brian Michael Bendis within Disney Infinity and playable in its Toy Box.

“Marvel Super Heroes fit perfectly into Disney Infinity, and with them we are pushing the platform’s limits of creativity and imagination,” said John Blackburn, VP and general manager of Avalanche Software. “We’ve enhanced and redesigned the gameplay to match the Marvel characters, while also making it easier than ever for players to express and share their own creativity.”

Updates include being able to upgrade characters with additional powers and skills, as well as looks, and the chance to now design interiors in the Toy Box mode.

New vehicles being added to the game include “Lola,” the flying red corvette from ABC’s “Agents of SHIELD,” motorcycles and a miniature helicarrier that multiple characters can ride.

The next iteration of Disney Infinity will be available on Microsoft’s Xbox One and Sony’s PlayStation 4 consoles.

In addition to the Marvel characters, Disney will announce new characters and playsets from its other films and TV shows in the coming months.