Has Kevin Spacey Found His Next Villain Role in ‘Call of Duty’? 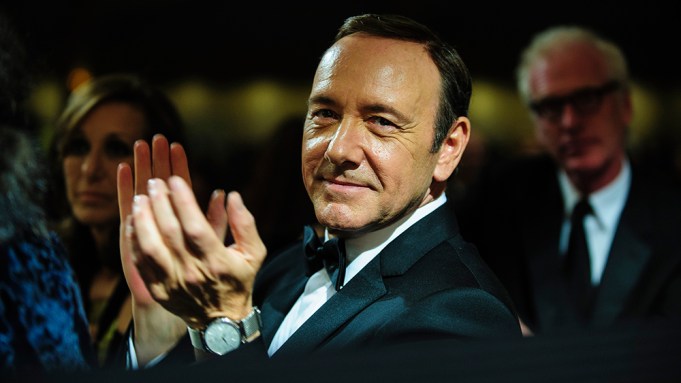 Kevin Spacey, who is a pro at playing slithery characters, could be making his first villainous turn in a video game, namely Activision’s blockbuster “Call of Duty” franchise.

A short audio clip made the rounds online this week, in which Spacey can be clearly heard saying, “And you think you can just march into these countries based on some fundamentalist religious principles, drop a few bombs, topple a dictator and start a democracy? Give me a break.”

Listen to the clip here:

He doesn’t have the Southern drawl that he has in “House of Cards,” ruling out the character he plays in the Netflix show, or the sequel to “Horrible Bosses” — at least we hope not. Given what he says, it’s also not likely to be from his stage work in “Richard III.”

But when running the audio file through a sonic visualizer (yes, we’re that nerdy), something very interesting pops up: the image of a man, looking like Spacey, holding a military weapon (see below).

The timing of the audio clip’s release comes as the gamemaker is about to announce the title and details of the next installment of “Call of Duty” on Sunday, according to the game’s website, which is expected to kick off a “new era” in the series. The company typically launches the campaign for the military franchise during the NBA playoffs.

Plus, Activision is no stranger to turning to Hollywood on “Call of Duty.”

But it’s looking like Spacey would portray a character that actually looks like him and provide another strong injection of star power to the franchise as “Call of Duty” faces increased competition from other titles, including last year’s blockbuster “Grand Theft Auto V.”

Activision has also produced the live action short “Call of Duty: Superpower for Hire” to promote its latest game (watch below).