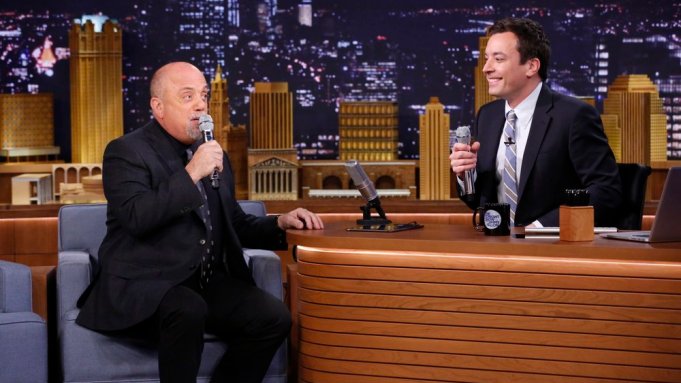 Jimmy Fallon sang a duet of “The Lion Sleeps Tonight” with Billy Joel on NBC’s “Tonight Show” last night with an assist from an iPad app that loops multiple audio tracks — instantly pushing it to the top of the iTunes App Store charts.

Fallon incorrectly identified the app as “The Looper” on the show, but that didn’t prevent TV viewers impressed with the demo from finding it: The Loopy HD app, which costs $7.99, shot up to No. 1 on Apple’s rankings of paid iPad apps, up from No. 201 before the telecast. The app is now down to No. 16, which is still impressive.

The app is developed by a firm called A Tasty Pixel, a “one-man indie software-development company which specializes in apps with beautiful and functional user interfaces — software that works like an extension of oneself, with the charm and elegance that make it a pleasure to use,” according to its website.

That developer is one Michael Tyson, who resides in Melbourne, Australia. “Woo! Thank you, TV!” he tweeted after the segment aired and drove Loopy HD sales through the roof.

It’s not clear whether Tyson knew about the Fallon bit beforehand. (He didn’t respond to an email requesting comment — it’s 3 a.m. in Melbourne as of this writing.) But he has already updated the description of the Loopy HD app to add: “As seen on ‘The Tonight Show Starring Jimmy Fallon’!”

The actual number of overnight sales of Loopy HD is unknown, as Apple does not release that information. But it’s safe to say Mr. Tyson is currently the No. 1 fan of Jimmy Fallon, even as he sleeps.

UPDATE: In an email late on Friday ET, Tyson explained that he had no idea Fallon would be featuring the app on the show. “The first I heard of it was when a friend tweeted at me that he’d just seen it on TV,” he said. “I’m thrilled, naturally — this is just about the best thing that can happen to an app developer. The segment was brilliantly entertaining, just the right amount of raw, and kinda infectiously fun, so it makes you want more.”