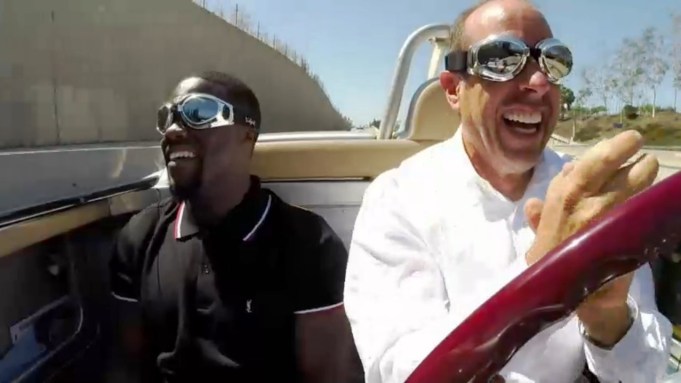 Season five of Jerry Seinfeld’s “Comedians in Cars Getting Coffee” on Sony’s Crackle digital network bowed Thursday, with the premiere featuring Kevin Hart and Jerry tooling around in a 1959 Porsche RSK Spyder on a “weird male date.”

The latest season of the show — which Crackle has said is its most-popular content with more than 70 million views to date — will also feature episodes with NBC’s “The Tonight Show” host Jimmy Fallon, Amy Schumer, Fred Armisen, Bill Burr, Ali Wentworth and YouTube star Miranda Sings, the awkward character created by comedian and singer Colleen Ballinger.

The first episode of season five of “Comedian in Cars Getting Coffee” includes a guest appearance by former “Seinfeld” cast-mate Michael Richards as “Dick Corcoran,” the cigar-chomping president of Crackle who tells Jerry the network is going bankrupt because of what it’s spending on the cars-and-coffee series. Season five will run seven episodes in all.

The webseries costs about $100,000 per episode to produce, Seinfeld told David Letterman this summer in an interview at the Paley Center for Media in New York.