Robin Williams and His Longtime Love of Videogames 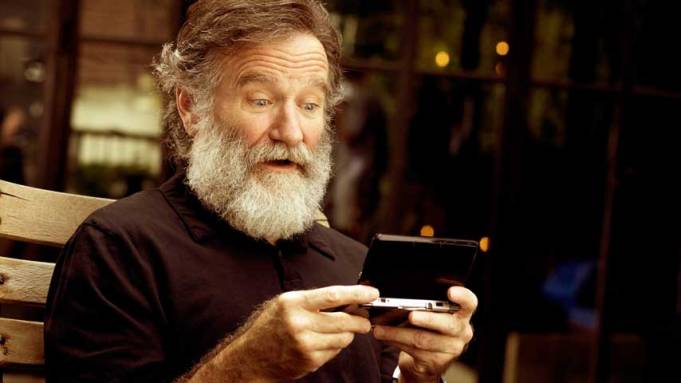 In between filming his movies, television shows and doing stand-up comedy, Robin Williams would spend countless hours playing videogames — in fact he considered himself a “huge” gamer, even naming his only daughter after the princess in Nintendo’s “The Legend of Zelda.”

“I don’t call her Princess Zelda. Only occasionally,” Williams said during an interview on “Late Night with Jimmy Fallon,” in 2009. “It was a sweet name and really kind of fit her. She’s really kind of magical.” Zelda Williams calls herself a “videogame legend” on her Twitter profile.

The relationship between the two would be showcased in a number of commercials that Nintendo produced for various “Zelda” game releases. Williams also discussed how the initial game in the franchise influenced his daughter’s name, suggested by his son Zachary, in the video below. “You’re lucky you’re not named Mario or Luigi,” Williams tells her during the discussion.

“What a great name for a girl, Zelda,” Williams says. “I bought one of the first Nintendo systems and brought that home, and we were playing ‘Legend of Zelda’ at the time, and it was addicting and I was playing it for hours and hours and hours.”

In interviews to promote his projects, Williams would often talk about his love for videogames, which began with “Zelda,” and also included fantasy fare like Blizzard Entertainment’s “World of Warcraft,” puzzle games like “Portal,” sci-fi shooters like “Half-Life” and its sequel and more recent military actioners like Activision’s “Call of Duty” franchise, calling it “cyber cocaine.”

In light of his suicide Monday, it may seem morbid that Williams talked about gaming in the language of drugs and drug addiction. But the comedian was unusually candid in discussing his struggles with drugs and alcohol, so it’s not entirely surprising he described videogames in a similar vein.

In fact, Williams preferred military games, given that he loved World War II movies like “Saving Private Ryan,” which had him play snipers in Electronic Arts’ “Battlefield” franchise. When asked what he was playing in 2005, he said “‘Battlefield 2 — the 2 stands for 2 in the morning.”

He would also tell friends he would trash talk teenagers while playing “Counter-Strike” and “Call of Duty” late at night.

“That’s when you realize you have a cyber addiction problem,” Williams joked to Fallon (watch the video below). “‘How are you doing?’ I need a joystick.”

Williams was such a fan of Nintendo’s “Zelda,” the company asked the comedian and his daughter to appear in commercial for the franchise, starting with “The Legend of Zelda: Ocarina of Time.” (watch the spot above and below), with the spot saying that both have been “Zelda fans since 1987.” They would also later appear in ads for “The Legend of Zelda: Skyward Sword.”

During a revealing Q&A session on Reddit to promote CBS’ comedy “The Crazy Ones,” Williams called “Portal” “insane,” “The Legend of Zelda: Ocarina of Time” “the best” and “Call of Duty” humbling, because “getting my ass kicked by an 11 year old is very humbling!”

“It’s been very unusual for me because I’ve done trips overseas to Iraq and Afghanistan, and I would see guys who had just come back from patrol playing ‘Call of Duty,’ and I would say ‘you’re living this stuff! And yet you’re still playing this game …'”

At the time of the interview, Williams also was looking forward to the launch of Microsoft’s Xbox One.

“I’m looking forward to the next Xbox,” he said, adding that he was currently playing “Battlestations: Pacific.” “I can’t imagine the graphics being any better. It will be like these characters are living in your house. I’ll have to be doing duck and cover just to get to the bathroom! For the WiiU or the PS4, at this point I haven’t seen them yet but I might have to check into the cyber wing at Betty Ford.”

Williams seemed to also prefer fantasy fare like “Wizardry,” “Warhammer 40,000” and completed Blizzard’s “Warcraft III: Reign of Chaos” when it launched in 2002. He especially enjoyed “Warcraft’s” lore and characters, which are now being turned into a movie by Blizzard and Legendary Entertainment that hits theaters in 2016.

He also was a fan of “World of Warcraft,” and the company is rewarding him with a non-playable character that will be integrated into the game after a petition, shortly after his death, accumulated more than 11,000 signatures.

But he was especially impressed with “Half-Life 2,” a sequel to the 1998 sci-fi game “Half-Life,” of which he was a big fan. After he was given the chance to see the newer installment at the Electronic Entertainment Expo in Los Angeles, in 2003, he said “It’s like you’ve been seeing two-dimensional and now you can see 3-D. It’s incredible.”

While Williams did voice work for animated films, he never appeared in a videogame. There were discussions to have him play a role in “Half-Life 2,” but scheduling conflicts prevented that from happening.