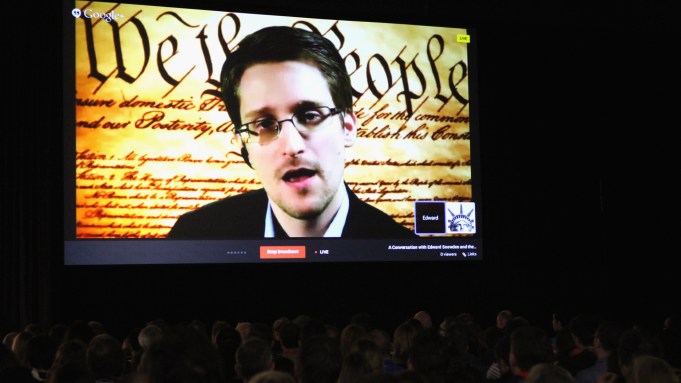 The former NSA contractor, who remains in Moscow living in temporary asylum, faces felony charges in the U.S. after revealing the agency’s mass surveillance program by leaking thousands of classified documents to media outlets.

Christopher Soghoian, principal technologist at the American Civil Liberties Union, spoke to Snowden from the Austin event along with Snowden’s legal adviser, the ACLU’s Ben Wizner.

The hour-long conversation was extensive and Snowden touched on a number of issues. He dispensed advice on how U.S. citizens can keep their web-surfing activities more private by using a free service called Tor, which encrypts web traffic. He also called on the technology industry to create more software and services that help guard individual privacy.

Snowden appeared to have no regrets about exposing the U.S. government’s surveillance methods.

The ACLU offered a live blog of Snowden’s talk on its website and the Texas Tribune’s website hosted a live video stream.

Fugitive WikiLeaks founder Julian Assange spoke at the SXSW conference in a similar manner on Saturday. Assange is living in asylum at the Ecuadorean embassy in London.