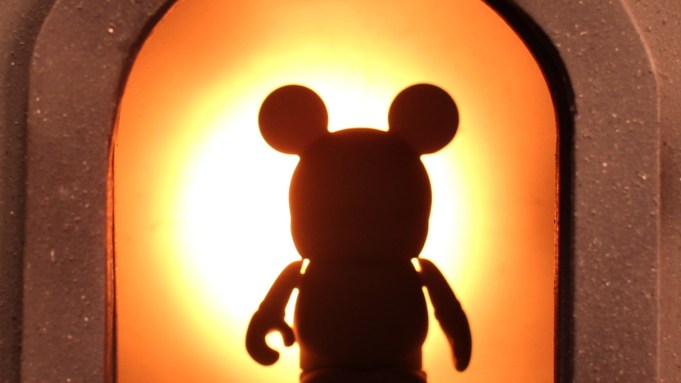 Disney has found a new way to display its line of Vinylmation figures than just the shelf. The Mouse House has produced “Blank: A Vinylmation Love Story,” an original stop-motion animated film that will be released exclusively through Google Play’s platforms starting today.

Disney Interactive produced the 38-minute film that follows Blank, an unpainted Vinylmation figure, who goes on a journey to find his lost soul mate, Bow.

The short film will be available for free through Google Play until Feb. 23.

It also is being screened inside Hollywood’s El Capitan Theatre, in front of “Lady and the Tramp,” and at Disney’s Hollywood Studios theme park in Florida.

Release is timed around Valentine’s Day, and Google users will also be able to unlock a second short, “Cranes in Love,” once they visit a separate site designed around “Blank,” where users can send frames from the film to friends and loved ones.

“They found you could get these figures to be fairly expressive,” said Matt Wyatt, creative director of Disney Online Original Studios.

A two-and-a-half-minute short was originally produced in which Blank comes out of a factory and tries to figure out how he fits into the Vinylmation world. When he meets another unpainted figure, she’s taken away from him. The sequence is similar to the first few minutes of “Blank: A Vinylmation Love Story,” Wyatt said.

“That short film had so much heart and creativity that people really responded to it,” Wyatt said. “We thought this should be something bigger and started to brainstorm and create this epic love story and adventure.”

The project, which went into production over a year ago, was initially going to be released as short episodes, but “as we got further into production we didn’t feel like it would do it justice to split it up,” Wyatt said.

Google wound up quickly signing on to distribute the film. It sees “Blank” as a way to promote Google Play’s library of digital movies, books, music, apps, games.

Disney Interactive hopes to produce more original shorts featuring the Vinylmation figures the way it produced a series of animated short films developed for the “It’s a Small World” ride that play on Disney.com, Disney’s YouTube channel and the Disney connected TV apps.

It certainly has plenty of Vinylmation characters to choose from with the line now boasting over 2,000 figures.

“You will see more from the ‘Blank’ universe,” Wyatt said. “There are lots of ideas where this story and this world could go. We’ve taken something that had an existing fanbase but didn’t have a narrative to it,” Wyatt said. “We’ve created a mythological backstory for Vinylmation.”