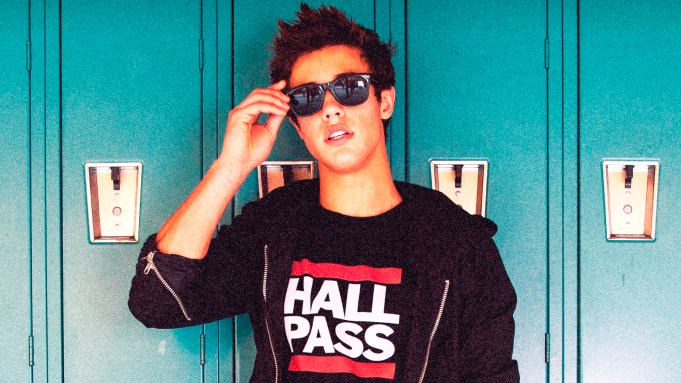 AwesomenessTV, the digital-focused division of DreamWorks Animation, will debut high-school comedy film “Expelled” with Vine star Cameron Dallas in the lead role in cinemas next month before releasing it on download-to-own services and VOD.

In “Expelled,” Dallas — who has 6.1 million followers on Vine and 2.8 million on YouTube — plays Felix, a prankster who’s kicked out of fictional Eastwood High after one stunt too many. The movie also feature a cast YouTube and Vine creators including Andrea Russett, Lia Marie Johnson, Marcus Johns, Michelle Glavan and Teala Dunn, as well as Matt Shively (Nickelodeon’s “True Jackson, VP”).

The film is slated for Dec. 12 theatrical debut in New York, Los Angeles and Chicago. An AwesomenessTV rep didn’t have info on which theaters will show “Expelled.”

Three days later, on Dec. 16, it will be available to purchase for $9.99 at ExpelledMovie.com and via Apple’s iTunes, Google Play, Comcast, Amazon Instant Video, Target Ticket and Walmart’s Vudu, with pre-orders available starting Friday. The film will be released on cable VOD Dec. 30.

AwesomenessTV has lined up The Coca-Cola Co. as presenting sponsor of “Expelled,” and is already selling T-shirts and other merch from the film’s website.

“The movie industry is changing in terms of not only who teens want to see on screen, but also how, when and where they want to watch,” said Brian Robbins, founder and CEO of AwesomenessTV. “‘Expelled’ gives fans of this new generation of stars a chance to see them on the big screen, or whatever screen they prefer.”

“Expelled” is written, produced and directed by Alex Goyette. Executive producers are Brett Bouttier (“The Smosh Movie”), Joe Davola (“One Tree Hill,” “Smallville”), Scott Levine, and Steven Spiegel and Alan Spiegel from 26MGMT. Film is produced by Robbins, whose credits include “Varsity Blues,” and Shauna Phelan (“The Smosh Movie,” “Terry The Tomboy”). The film has been rated PG-13.

Cameron Dallas is repped by WME Entertainment and managed by 26MGMT.