Amazon’s Test After ‘Transparent’: Can Studio Maintain Its Momentum?

Execs gave Jill Soloway freedom to create a 5-hour transgender dramedy. The question is whether digital upstarts like Amazon will continue on that path 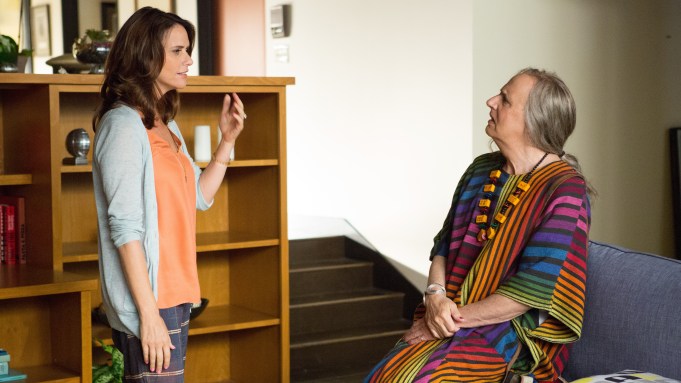 Amazon Studios, an upstart trying to stand out amid a veritable glut of new television shows, is placing its original series bets on a core principle: The showrunner is (usually) right, and the studio’s job is to pick the right projects and get out of the way.

For Amazon, that operating premise gets its biggest test to date with Jill Soloway’s “Transparent” when all 10 half-hour episodes bow Sept. 26 on the Amazon Prime Instant Video service. The dramedy tells the story of an L.A. family, the Pfeffermans, whose father, played by Jeffrey Tambor, comes out as transgendered to their adult children. Soloway, an alum of HBO’s “Six Feet Under,” serves as showrunner and director.

With “Transparent” getting all the right kind of attention, the question is whether the approach can scale up — and if Amazon has a recipe to consistently produce breakout series that can garner audiences, buzz and awards. The same applies to Netflix, which has taken a similar minimally invasive tack for originals; that’s yielded Emmy contenders “House of Cards” and “Orange Is the New Black,” along with less-viewed fare like “Lilyhammer.”

SEE ALSO: Amazon to Spend More Than $100 Million on Original Series in Q3

Amazon’s first crack at originals, comedies “Alpha House” and “Betas” launched last fall, failed to capture wide attention. “Transparent,” by contrast, has won critical kudos for its indie-film feel (Soloway won 2013 Sundance Best Director award for “Afternoon Delight”) and has been hailed as one of the first TV series featuring a transgendered character in a leading role.

Variety’s Brian Lowry said the series “represents the sort of breakthrough destined to firmly put Amazon’s nascent original programming push on the map.” There’s already talk of a second season for “Transparent” (though the studio has not officially announced a decision on a renewal).

According to Soloway, Amazon’s quick-and-lean Internet studio model gave her freedom and control that was markedly different from working with traditional TV networks or film studios. “Transparent” could conceivably have found a berth on cable channels like HBO or Showtime — which have been breaking the rules of TV and empowering creators for years. But Soloway said working with Amazon was worlds apart than her past experience.

“This has been absolutely the least amount of interference… than anything I’ve ever done before,” said Soloway, whose own father came out as transgendered a few years ago.

Because she didn’t have to wade through layers of executive approvals, Soloway and her writers and actors could revise key plots points and dialogue on the fly. And because Amazon will release the full season in one binge-friendly batch — the first time it’s doing so with a series — she was able to pace the show differently than would be required for a typical TV show. “For me, it was like making a five-hour film with distribution built in,” Soloway said.

Joe Lewis, head of comedy for Amazon Studios, sees his role as guiding showrunners on big-picture, story-arc questions. But, he said, “I’m not trying to give notes or say ‘No.’ ” Before joining Amazon in 2012, Lewis has worked as a development exec at Twentieth Century Fox, focused on comedy feature films, and Comedy Central.

Lewis said his main contribution to “Transparent” was to persuade Soloway to delay the point in the show when Tambor’s character reveals her identity to the kids. At first, Maura came out in the pilot. But that “seems so anachronistic,” Lewis said. “Originally it was on page nine. To me, it was all about the fallout, that was the most interesting. That was the thing that needed to slow down. All we did was change that one fact. But it fundamentally changed how the show progressed.”

Amazon is upping its investment in originals, telling investors it plans to spend more than $100 million on productions in the third quarter of 2014. Other series coming to Amazon, either later this year or in early 2015, are two hour-long dramas — supernatural thriller “The After” from Chris Carter (“X-Files”) and cop show “Bosch” — along with another half-hour comedy about the New York classical music scene, “Mozart in the Jungle.”

And last month, Amazon Studios rolled out five pilots in its third pilot season, including comedies from Steven Soderbergh (“Red Oaks”), Whit Stillman (“The Cosmopolitans”) and Jay Chandrasekhar (“Really”), and dramatic thrillers from Marc Forster (“Hand of God”) and Shaun Cassidy (“Hysteria”). It’s expected to decide which to greenlight into full series in the next few weeks.

To be sure, Amazon Studios wants to create SVOD originals that are unlike anything on television. As with Netflix, Amazon doesn’t care about ratings per se (nor do either of them release viewing metrics). However, it’s still early days for the Internet-studio upstarts. There’s a chance that as they mature, they’ll decide to exert more influence like their Hollywood forebears.

Amazon’s strategy, at this point, is to continue the pilot-bakeoff development process, and after picking the winners largely leave creators to their own devices, Lewis said. “Transparent” is a “great example of everything we’re trying to do,” he said. “I’ll never do anything that doesn’t have risk to it.” At the same time, Lewis added: “I don’t want to make a bunch of intellectually prosperous, audience-challenging shows.”

Soloway sees the rise of digital TV shows and movies as an unstoppable trend, one that opens up numerous opportunities. “For a TV writer, there used to be six options,” she said. “Now there are probably 60.”

There’s similar excitement among agents and actors in working in digital, Tambor said. Where questions used to be along the lines of, “You are getting paid, right?” now industryites are “on fire about Internet video,” Tambor said.