Republicans Turn to Games to ‘Win Back Senate’ 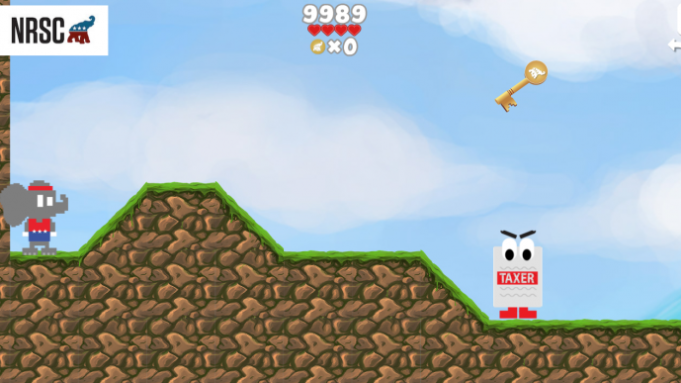 The Republican party is taking a page from Hollywood’s marketing playbook and created a free-to-play videogame to promote its candidates.

While online games have been used to promote films and TV shows, the National Republican Senatorial Committee has launched an online game as a way to “raise awareness in every possible way” to regain a majority in the Senate.

In the free 8-bit game, “Mission Majority,” players control an elephant named Giopi as they try to help a campaign get more volunteers while avoiding evil “Taxers,” deployed by Senate Majority Leader Harry Reid and President Obama to thwart your efforts and suppress their high taxes, or mute the “misleading words” of “Mudslingers” and “escape their false and empty rhetoric,” the NRSC said.

In the game’s welcome screen, Giopi says: “Hi, my name is Giopi! I’m one of the GOP’s best volunteers for the 2014 midterms, and I’m here to show you how we can win back the Senate! There is going to be a lot of red tape and regulations in our way, but we need to overcome them in order to succeed.”

“Mission Majority” is part of the NRSC’s mission to elect more Republicans to the United States Senate, with the organization funding the creation of the game.

“This year’s Republican Senate candidates are the strongest in decades (if not ever), and we want to raise awareness in every possible way,” the NRSC said of the game. “With that in mind, we are having a bit of fun with our approach.”

“Mission Majority,” of course is also meant to raise money for the Republican party, with gamers given the chance to donate or purchase items or sign up to help the NRSC campaign.