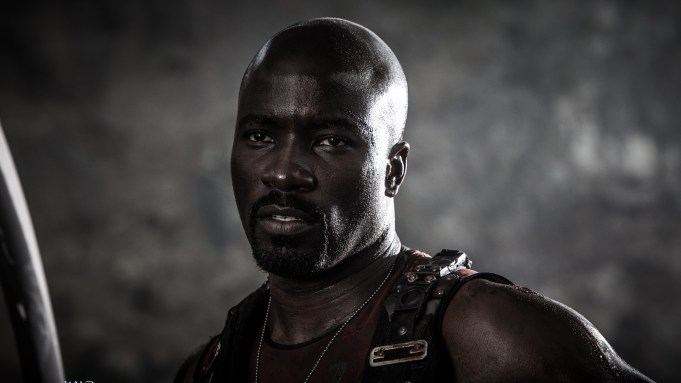 Xbox has provided the first look of Agent Locke, the lead character played Mike Colter in the upcoming digital series “Halo: Nightfall,” who also will be prominently featured in the “Halo 5: Guardians” video game.

Colter (see above, more images below) may be best know for his roles in CBS series “The Good Wife” and Kathryn Bigelow ‘s military pic “Zero Dark Thirty,” but “Halo” could soon put him on the radar of a whole new fanbase.

In the live action digital series, Colter plays an agent with the Office of Naval Intelligence (ONI) whose team is sent to investigate terrorist activity on a distant colony world and are eventually drawn to an ancient, hellish artifact during their search. Locke, a new character in the “Halo” universe, plays a major role in “Halo 5: Guardians,” which releases on Xbox One in 2015.

Even without a background in the “Halo” universe, Colter told Variety that Scheuring’s “script was incredibly gripping. It introduces an intriguing and mysterious world that I wanted to know more about.”

Microsoft hopes gamers will too.

It also produced “Halo: Forward Unto Dawn,” timed around the release of “Halo 4,” directed by Stewart Hendler.

This time around, Ridley Scott is producing “Nightfall” through his Scott Free Prods banner, along with 343 Industries and Xbox Entertainment Studios, the in-house production arm that Microsoft is shuttering as part of a cost-cutting move.

Despite being a massive franchise not only for Microsoft but also the videogame industry, “Halo” still gave Colter some hesitation.

Playing a character in a series based on a video game “was a new medium for me,” Colter told Variety. “Who would the audience be? How would they access the series? Fortunately, ensuring accessibility to a broad audience is one of the things that Scott Free TV and 343 values first and foremost. Not only does ‘Halo: Nightfall’ cater to the hardcore ‘Halo’ fans, but it’s also designed so newcomers to the franchise, like me, can easily enter the ‘Halo’ universe, identify with the characters and be entertained by the story being told on screen.”

Xbox does plan to make sure the series is available to as many people as possible on a variety of platforms when it’s released later this fall.

That will include Xbox Live — offered through the Xbox One and Xbox 360 game consoles, as well as Microsoft’s mobile devices like smartphones and the Surface tablet. Series will also be packaged with “Halo: The Master Chief Collection,” which will update the graphics for all of the previous “Halo” games for the Xbox One on Nov. 11.

Xbox will promote “Nightfall” at this week’s Comic-Con in San Diego, with an hour-long panel on July 24, at 11:45 a.m., where 343’s executive producer Kiki Wolfkill and Frank O’Connor, the franchise development director for the “Halo” franchise at 343, will discuss the project with Colter and present footage.

Days before the start of Comic-Con, Colter said the experience to film “Nightfall” mimicked making a movie.

“When I first heard of the project it was presented as a film that would then later be edited into chapters,” he said. “So in almost every way it is a film. The only difference is that it will be released in segments.”

The action is also elevated.

“My favorite experience thus far would be shooting a scene in Belfast where I’m chasing an enemy who poses a serious threat to the people Agent Locke has sworn to protect through the city,” Colter said. “The scene is an action-packed sequence that involves some cool special effects and a lot of coordination with the stunt team to fulfill the director’s vision. I can’t wait to see how it turns out.”

Microsoft first revealed plans for “Halo: Nightfall,” a separate series with Steven Spielberg, and the “Halo: Master Chief Collection” at the Electronic Entertainment Expo in June (see the presentation below).