Why Publishing Stolen Sony Data Is Problematic but Necessary 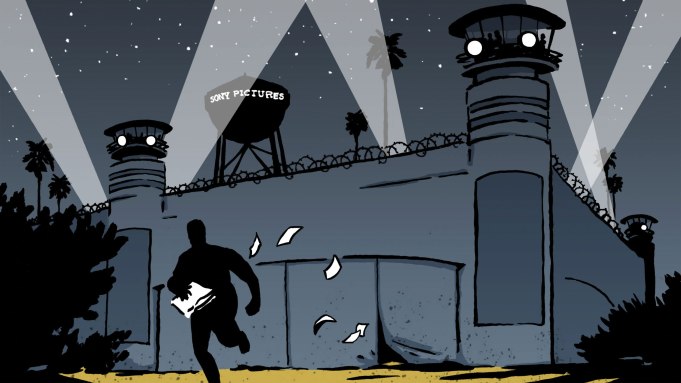 The more Sony Pictures data keeps leaking, the more my moral compass spins like a weather vane in a hurricane.

What just a week ago seemed such a clear-cut case of doing what my instincts have told me to do at every other moment of my career is now making me increasingly queasy. It’s getting harder for me to report on the contents of Sony’s leak without wondering whether I’m somehow complicit with these nefarious hackers by relaying the details of seemingly every pilfered terabyte.

Salaries. Budgets. Scripts. Aliases. On the one hand, I’m drawn to discovering what I’m not supposed to ever know, like the warm conviviality Scott Rudin and Amy Pascal enjoy. On the other hand, I’m repelled by the circumstances by which this opportunity has come to pass.

Let’s get real: The hackers are playing the press as pawns. Journalists are essentially doing their bidding by taking the choicest data excerpts and waving them around for the world to see, maximizing their visibility.

No doubt Sony sees the press right now like a zombie mob from “The Walking Dead,” mindlessly staggering from one carcass to another to consume parts of what the hackers already killed.

From the beginning, Variety has not shied away from reporting on what has emerged from the data to date. That isn’t to say absolutely everything that pops up will be duly noted in our publication — personally identifiable information about execs, for instance, would be one no-no.

But my mounting misgivings have forced me to explain to myself what all this reporting is really about. While I found a lot to question about the rationales, ultimately I’ve arrived at an uneasy peace with why the leaks just can’t be ignored.

When ethical boundaries get murky, it’s only natural to grab for some sense of precedent. The one that comes to mind for me is a relatively recent example: the celebrity nude photo leak in October that besmirched the good names of everyone from Jennifer Lawrence to Ariana Grande.

These young women clearly had their privacy invaded. There was a lot of justifiable hand-wringing in the press about the plight of these women, but why is there none of that for the corporations? Their privacy has been invaded as well, albeit in a different way.

Nude photos weren’t hacked at Sony, but it’s interesting that while nudity is deservedly considered to be crossing the line, financial records aren’t accorded a measure of respect as well. Rest assured that SPE chairman Michael Lynton would probably rather you see his private parts than the company’s movie budgets.

The difference between nude celebrity photos and the leaked Sony data, respectable media outlets will argue, is only the latter is “newsworthy.” But what does that really mean?

Perhaps “newsworthy” is as simple for some publications as “if readers are interested in it, then it is newsworthy.” For others, “newsworthy” conveys some vague sense of the material being important.

Edward Snowden surely qualified for the latter notion: He shared with the press information he stole because he felt it was vital for a democracy to get a fuller understanding of how its government operated. The ends justified the means, some would argue.

But Sony is not a government; conflating the imperatives behind covering a government and a corporation feels like a false equivalence to me. Both are sizable institutions, but am I, as a journalist, entitled to see every last spreadsheet a private company has even if they were stolen just because I report on Sony the way, say, Glenn Greenwald reports on Snowden? Were it not for the example the Snowden affair set, I’m not so sure the press would have leapt on the data from the Sony leak as zealously as it did.

In the absence of upholding a healthy democracy, what is the justification of our coverage here? We can cite the executives mentioned in these leaks as “public figures” who merit any and all scrutiny, but again, false equivalence: We can take extraordinary means to uncover something about President Obama, but doing the same for the CEO of a corporation who isn’t suspected of any malfeasance—that’s different. We’ve seen the leaks unearth instances of questionable judgment and poor taste, but no actual misconduct.

For some publications, I suspect publishing the leaks really amounts to little more than thinly veiled schadenfreude. Because Sony is a powerful entity, the pretense can be floated that exposing the data has some importance. But really, the press loves a great narrative just as much as a movie studio, and here we’re just casting Sony in the villainous role of the greedy capitalist machine getting what it deserves. There’s no true need to expose every aspect of its inner workings, but because Sony isn’t as sympathetic a character as say, selfie-snapping ingénues, no one is going to mind if the press appropriates the stolen data.

Let’s entertain some hypotheticals here; adjusting the optics brings the larger issue into focus. What if instead of Sony, it was your favorite charity organization or advocacy group that had its documents leaked? Would journalists descend on that data with equal fervor or give them a pass?

Better yet, let’s take hacking out of the equation altogether: What if suspected hacker North Korea bombed Culver City? Can I sift through the rubble for Sony executives’ hard drives?

Outlandish as that sounds, it’s also strange that because the nature of the Sony attack was virtual instead of physical, it’s fair game to scavenge for data. Trust me, when Sony gets the clean-up bill from the hacking, the distinction between a physical and virtual attack may not seem arbitrary.

Perhaps all data is not created equal; some information rises to the level of truly newsworthy while others do not. Even there, moral clarity feels hard to come by. Serving up gossipy tidbits like what aliases Sony-affiliated celebrities use when they check into hotels might seem more deplorable than divulging actual financial records because the latter smacks of more substantive journalism. But don’t be so sure. If the information being shared reveals to its partners or competitors something that can harm Sony’s business, gossip may be less pernicious.

Of course, it’s not my job to help Sony’s business. Which gets at what I also think is really motivating the current coverage: In an industry where public relations attempts to control the flow of information with a very heavy hand, there’s something very liberating about watching that hand get blown to smithereens by the Sony hack. But that doesn’t make exploiting that destruction right.

There are those publications who have aggregated news of the data dug up by others instead of doing it themselves. While the distinction shouldn’t make much of a difference, this is where the impossibility of steering clear of this story comes in. Were a publication to report on the fact of the Sony hack and merely allude broadly to the data that has been disclosed, a tiptoe dance around the data itself begins. To convey the enormity of what Sony had stolen with any degree of specificity is to feel the quicksand pull of what’s so awfully hard to avoid here.

What’s particularly problematic is that even were a publication to abstain from publishing leaked material, dozens of others will do so regardless. Unfortunately, the data is in the public domain for all to consume. That in turn propels a news cycle from which a publication that stands apart risks looking out of the loop. Should information from a leak force someone like Rudin to make a public apology, how do you report on the apology without citing what he is apologizing for?

But what makes partaking of the Sony data truly unavoidable is that publishing content from the hack isn’t materially different what business journalists do every day. For instance, what if instead of sharing Pascal’s salary from a purloined document, a trusted source discloses that information to me on the phone?

Journalism is, in some sense, permissible thievery. We occasionally catch wind of what our subjects would rather us not know, and we don’t hesitate to report it if it contributes to an understanding of what we’re writing about. But the way it came to light in this instance makes me wish this never happened.

Every reporter has fantasized about stumbling upon a treasure trove of secret documents. So when a story such as Sony is spread in front of us in all its unprecedented scope, it’s instinctive for us to pounce. But this time around, acting on that reflex just doesn’t feel right…even though it isn’t wrong.