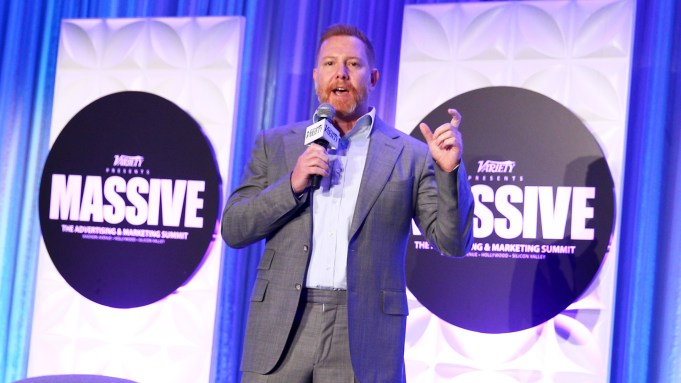 “We’re not building a campaign in the traditional sense. This is a relationship where we continue to test new ideas, measure the effectiveness and look for new ways to disrupt the old model together,” Relativity Media CEO Ryan Kavanaugh said Thursday morning at Variety’s Massive Summit.

Addressing  Relativity’s recently launched Madvine, the entertainment company’s new in-house agency that will manage entire marketing campaigns, Kavanaugh discussed the importance of integrating brand products early on in the production stage of a film. Evian, Madvine’s first client, will be featured in the upcoming Nicholas Sparks movie, “The Best of Me.”

“Evian is in the room with us,” Kavanaugh said. “They’re in there when we’re developing our scripts for film and television, and they’re in there with us creating strategy for our other businesses. And that is completely unprecedented.”

Kavanaugh believes that the convergence of video content and marketing is the future of brand content partnerships, and he is not the only one. Other companies such as Mondelēz International, Absolut Vodka and Pathway Genomics have also signed on with Madvine. Even though these brands run the gamut of industries, they’re all looking to “challenge the status quo,” Kavanuagh said.

“They recognize the importance of content, and they recognize that reaching the consumer today requires a new and innovative thought process. At Relativity that’s exactly what we like to do,” he said.

Courtin recognized the importance of changing media trends early on and realized that companies needed to change course in terms of branding and marketing. But she doesn’t forget the important basics of successful marketing: target audience and objective of the brand.

“I think that everyone sees the pressure that we’re having in terms of traditional media, so for brands to breakthrough, it’s a blending of arts and science,” Courtin said. “Understanding that consumer, what’s the right film? Who’s the right star? What’s the right moment to connect?”

Mentioning Beats by Dre as an example of how culture can make-or-break a brand, Bough talked about how important it is for companies to stay relevant in the cultural conversation.

Of course, companies should still avoid overt product placement, as audiences tend to criticize and avoid such obvious attempts.

“It’s not about making sure that you’re looking at the logo,” Courtin said. “It’s about how you can be authentically woven into the story.”