The Muppets Crave Subway in ‘Most Wanted’ Ad Campaign 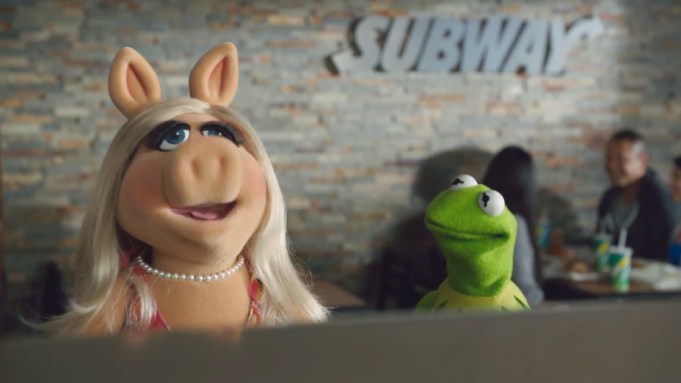 With Kermit the Frog, Miss Piggy and friends having piled into a Toyota to promote the carmaker’s tie-in to “The Muppets Most Wanted” around the Super Bowl, the characters are now headed to Subway.

Subway, which has been Disney’s official fast food partner for many of its films since “Brave” and “Frankenweenie,” will post a 60-second video on its Facebook page today that features Kermit and Miss Piggy inside a Subway restaurant. While there, they meet longtime Subway spokesman Jared Fogle. Subway is promoting the video across its social media channels. The ad will be shortened to a 30-second version to air on TV.

In the spot, Miss Piggy orders an oven roasted chicken on wheat and demands the Swedish Chef “to pile on those veggies.”

“That’s what this Muppet most wanted,” chimes in Kermit, with a clever reference to their upcoming film.

SEE ALSO: The Muppets Catch a Cheaper Ride to the Super Bowl with Toyota

Ad is meant to emphasize Subway’s ongoing efforts to create better choices for families and to play a role in improving the eating habits of kids.

In January, Subway was recognized by the Partnership for A Healthier America for its nutritious kids’ meals and continued nutritional improvements. All Subway restaurants in the U.S. now feature a “Playtime Powered By Veggies” door cling, letting both kids and families know that they can choose all the fresh vegetables for their sandwich.

Short is the latest online series of videos to feature the Muppets as Disney promotes “Most Wanted.” They’ve also starred in a series of “Muppisodes,” some of which have featured cameos by celebrity chef Gordon Ramsey and WWE’s Mike “The Miz” Mizanin.