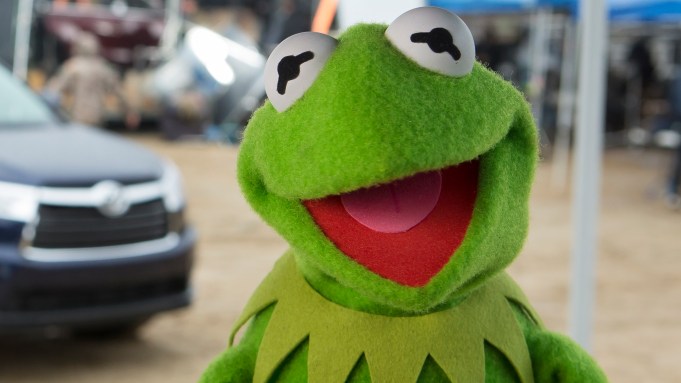 The Muppets have hitched a ride to the Super Bowl in a Toyota.

In a partnership that shows that studios don’t always have to spend $4 million on a 30-second ad during the Big Game to promote a movie, Disney has offered Kermit the Frog and his felt-covered friends to Toyota to star in a new commercial that helps the Japanese automaker hype its redesigned Highlander SUV as well as “Muppets Most Wanted,” out March 21.

In the 60-second spot, called “Joyride,” the Muppets teach former NFL player Terry Crews, and now co-star of Fox’s comedy “Brooklyn Nine-Nine,” how to “unborify” his life as they borrow his Highlander. Ad features an original song, dance numbers and more than a dozen Muppets piled into the eight-passenger SUV.

Upcoming ad will also be supported with social media updates from the Muppets as they travel to the Super Bowl, taking place from New Jersey’s MetLife Stadium.

Fans can also chat with the Muppets on gameday by tweeting @Toyota or using the hashtag #NoRoomForBoring.

Agencies Saatchi & Saatchi LA, Conill and 360i developed the ad and social media efforts for Toyota and Disney.

The Super Bowl ad (which will air during the second quarter) and the tie-in with the movie mark the first time Disney has worked with Toyota.

“The Muppets’ classic mix of high energy and heart matches perfectly with Toyota’s spirit of adventure, and Kermit, Gonzo and the whole gang look forward to many zany road trips,” said Don Gross, VP, promotions at the Walt Disney Studios.

Toyota saw “Muppets Most Wanted” as a way to capitalize on its ongoing “Let’s Go Places” campaign while promoting its Highlander SUV to families. Kids have increasingly become more influential over which new vehicles their parents buy, and Toyota has stepped up its efforts to target that demo in recent years.

Last year, it went on tour with a Highlander custom-designed for “SpongeBob SquarePants” fans through a deal with Nickelodeon.

The Disney-Toyota deal isn’t the first time a studio has partnered with a promotional partner on one of its movies to find a cheaper way to get airtime during the Super Bowl.

In 2009, DreamWorks Animation promoted “Monsters vs. Aliens” during the game with a 90-second spot broadcast in 3D. Stunt cost tens of millions of dollars, according to toon studio chief Jeffrey Katzenberg, but the cost was offset by partners PepsiCo and its SoBe Life Water brand and Intel, which developed the 125 million 3D glasses that were given away to consumers.

While DreamWorks helped pay for the spot, the cost was far less than what the studio would have spent on its own.

The timing of the Muppet sequel’s release and Toyota’s goal to reach families clearly paid off for Disney, which also has an ad for Marvel’s “Captain America: The Winter Soldier,” and bought time for “Need for Speed,” an adaptation of Electronic Arts’ video game racing franchise it’s marketing and distributing for DreamWorks.

The Super Bowl essentially kicks off Toyota’s promotion for “Muppets Most Wanted,” which will have the characters appear in other ads and marketing materials highlighting the features of the new redesigned Highlander.

Ricky Gervais, Ty Burrell and Tina Fey star in the sequel, which has the Muppets finding themselves entangled in an international crime caper. James Bobin returns to direct from a script by Nicholas Stoller. David Hoberman and Todd Lieberman produce, with Stoller serving as executive producer with John G. Scotti.

“We all grew up with Kermit and the Muppets, and that makes Toyota’s collaboration with Disney very special for us,” said Jack Hollis, VP of Toyota Division Marketing at Toyota Motor Sales, U.S.A. “The two brands share a focus on delighting guests, and this allows us to take them along on a fun ride.”