After the success of bringing Butterbeer to life, Universal's chefs have cooked up other themed dishes for new Harry Potter park 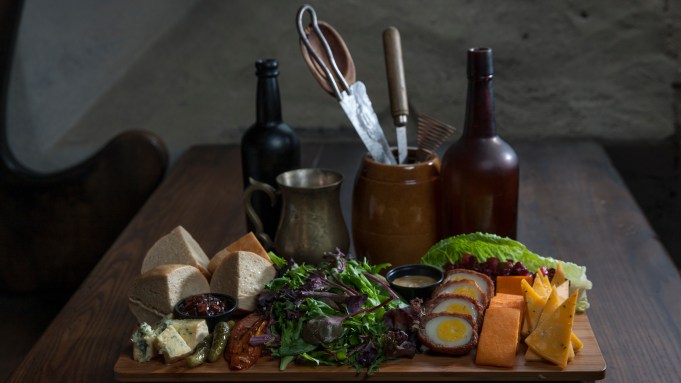 First frothy mugs of Butterbeer, now Chocolate Chili, Bangers and Mash and Sticky Toffee Pudding will be on the menu at Diagon Alley when Universal Studios Florida opens the expansion of its Wizarding World of Harry Potter theme park in June.

The restaurants will include:

— The Leaky Cauldron, the popular pub and inn for wizards where guests can order Fisherman’s Pie (salmon, shrimp and cod baked together under a potato crust), Bangers and Mash (roasted sausages with creamy mashed potatoes), Toad in the Hole (sausage baked into a Yorkshire pudding and served with onion gravy), Fish and Chips, and the Ploughman’s (see above: a platter of English cheese, crusty bread, cornichon pickles, apple beet salad, Branston pickle and a Scotch egg).

— Horizont Alley, on a street branching off Diagon Alley, where guests will be able to transform drinks with elixirs from Eternelle’s Elixir of Refreshment. The available elixir selection at the cart includes Draught of Peace, Babbling Beverage, Elixir to Induce Euphoria and Fire Protection Potion.

— And for more beverages, eateries will also serve new draught beers created exclusively for the land, including Wizard’s Brew and Dragon Scale, new beverages like Fishy Green Ale and Tongue Tying Lemon Squash, and popular drinks Pumpkin Juice and Butterbeer that have been big sellers since Wizarding World opened in 2010.