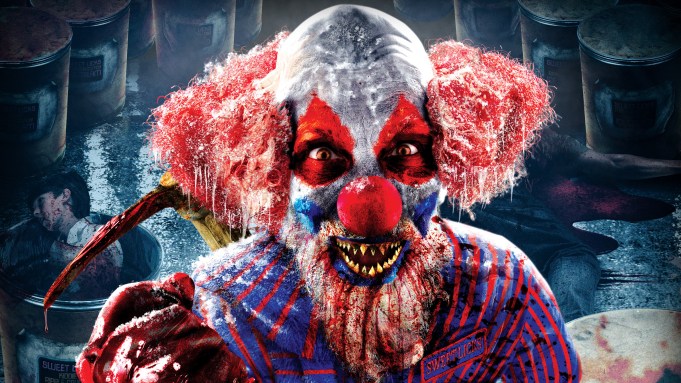 Rock guitarist Slash has composed the first original score that will be featured in a maze at Universal Studios’ annual “Halloween Horror Nights,” that will start to scare guests next month and has become a major draw and revenue generator for the company’s theme park business.

“Clowns 3D Music by Slash” will only be featured at the company’s Hollywood theme park and revolve around the psychological disorder known as Coulrophobia, an extreme and irrational fear of clowns.

The former member of Guns N’ Roses, Snakepit and Velvet Revolver joins Rob Zombie, Alice Cooper and Black Sabbath, who also have designed mazes for Universal in the past.

“I’m a huge fan of ‘Halloween Horror Nights’ and was inspired to partner with Universal Studios Hollywood because they are the founders of creating extreme horror,” Slash said. “I’ve been composing music for as long as I can remember and jumped at the chance to be an integral part of this year’s event and create the original score for this creepy clown maze. I can’t wait to see the fans’ reactions and will be first in line to experience the maze myself.”

“Halloween Horror Nights” starts Sept. 19 in Hollywood and Orlando, just days after Slash releases his next album, “World on Fire,” on Sept. 16, with Myles Kennedy and The Conspirators. He recently completed the “Let Rock Rule” world tour with Aerosmith.

Previously announced “Halloween Horror Nights” mazes or attractions at Universal’s parks in Hollywood and Orlando this year include “The Walking Dead: The End of the Line,” “From Dusk Till Dawn,” “Dracula Untold: Reign of Blood,” “AVP: Alien vs. Predator,” “An American Werewolf in London,” “Face Off: In the Flesh,” and “The Purge: Anarchy.”

“It’s an honor to collaborate with one of the most iconic rock legends around,” said John Murdy, creative director at Universal Studios Hollywood and executive producer of “Halloween Horror Nights.” “From the moment I heard Slash’s original composition for the maze, I immediately knew he got it, as the vibe and feel of his score are so right on. He captured the exact tone we were looking to convey to our guests, and it’s great having Slash be a part of this incredible event.”