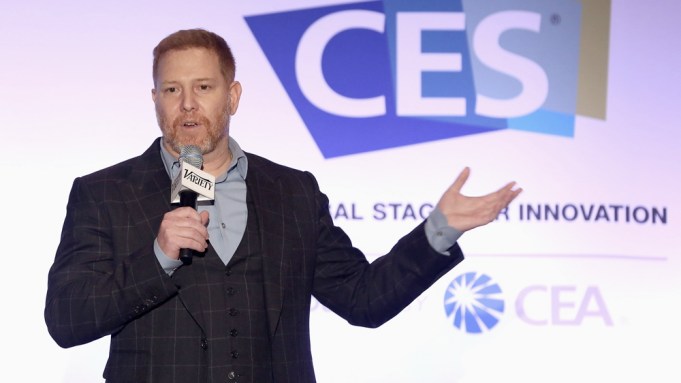 “We need to welcome the new world,” Kavanaugh said during the Variety Entertainment Summit at the Consumer Electronics Show on Thursday in Las Vegas. The last time he attended the tech confab was 13 years ago, he said, and since then he has seen Hollywood “fight with vigor” the introduction of new technologies like DVDs and Netflix.

“Today, that seems silly,” he said. “The key is to embrace disruption and change early. Don’t react to it decades later. You can’t fight innovation.”

Kavanaugh said studios have been paralyzed by their existing legacy structures and need to shake up the business models they’ve built over time that have established reliable revenue streams. Those aging models are facing serious competition and threats “not just from people like us,” he said, “but from gaming, social media and online shortform content. Now they’re facing real competition. If you have a smartphone, you can give content to the world.”

“The days of putting a movie in movie theaters because people don’t have a choice is over,” Kavanaugh said. “For the first time, (studios) have to give the consumer back the power.”

Kavanaugh called for “a coexistence of well-funded studios and consumer voices to create content that was never before possible – content that the consumer will want and like before we give it to them, not $100 million later. Not a day after the television premiere of a show.”

Consumers are already taking control over content, choosing when and how they want to watch it, he stressed.

Because of that, Hollywood should work more closely with its audience to develop projects like movies and TV pilots.

He described a crowd-sourced development system on steroids that lets audiences sift through TV pilots, for example, and submit their opinions before a show is produced.

He also suggested that Hollywood can’t be focused on making movies and TV shows anymore; instead the studios should serve as “content engines.”

“We need to make other kinds of content and lots of it,” he said, giving examples of how Relativity has expanded into sports, gaming and fashion to not only represent talent but produce content around them. “The current legacy structures at the studios doesn’t allow that,” he said.

Relativity is producing 11 series around 400 athletes, for example, works with Major League Gaming and will soon launch a new branded entertainment division.

Company is also developing a technology platform that organizes films, TV and other forms of entertainment under a loosely branded My Everything platform that will use a content engine to supply entertainment across all platforms. “The brands behind it will be well known outside the media business,” said Kavanaugh, whose Relativity was early to sign an exclusive distribution deal with Netflix.