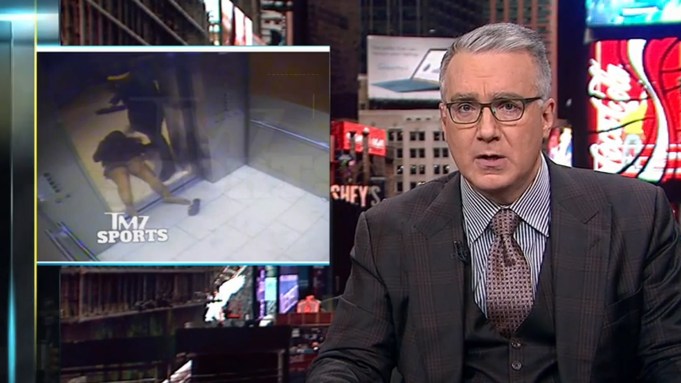 ESPN host Keith Olbermann has accused the NFL and commissioner Roger Gooddell, among others, of covering up the Ray Rice domestic violence situation, which escalated Monday when the Baltimore Ravens released the star running back after TMZ posted a video of him apparently knocking out his then-fiance.

Rice was given a two-game suspension by the NFL last month over the incident, but on Monday, the league suspended the football player indefinitely as a result of the graphic video.

“We begin tonight with the unavoidable and simple truth that intentionally, or by neglect, the Atlantic County, New Jersey, District Attorney’s Office, the Baltimore Ravens, the National Football League, and commissioner Roger Goodell have conducted a cover-up of Ray Rice’s assault on his then fiancée on February 15th,” he said on Monday’s ESPN2 program.

“There is no other conclusion possible. Each body, each leading individual involved came to a judicial conclusion about what had happened to Janay Palmer and what should happen to Ray Rice. And each, through deception or incompetence, misled the public, damaged the efforts of every man and every woman in this country seeking to merely slow down the murderous epidemic of domestic violence, and made a mockery of the process by which those who batter those they claim to love are to be brought to justice.”

It’s the second time in a month Olbermann has said the NFL commissioner should resign. Last month he accused the team the league of protecting its bottom line rather than female fans of the sport.

ESPN’s Jason Whitlock also slammed the league on Monday for its “epic failure” saying that Olbermann had it right.

“Goodell created this mess a long time ago,” he wrote. “He should soon follow Ray Rice in looking for a new line of work.”