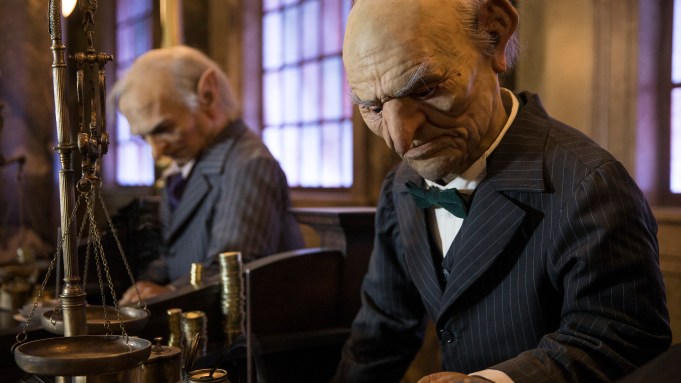 Universal Orlando Resort has provided a more detailed look at its “Harry Potter and the Escape from Gringotts” ride inside Diagon Alley, the expanded portion of the Wizarding World of Harry Potter theme park that will open this summer.

The ride is one of the main attractions inside the new area, and will replicate the moment in J.K. Rowling’s books and movies when Harry, Ron and Hermione break into one of the most guarded places in the wizarding world, Gringotts bank, to retrieve a magical object that will help defeat Lord Voldemort.

The exterior of the ride features a 60-foot dragon that breathes fire. Inside, visitors will encounter the goblins that operate the bank and its vaults, villainous Death Eater, Beallatrix Lestrange and Voldemort.

“Harry Potter and the Escape from Gringotts will change the way you think about theme park attractions,” said Mark Woodbury, president of Universal Creative. “We’ve created an entirely new type of ride that propels guests into the story like never before, and guests will remember it long after their visit to Diagon Alley.”

When open, the Wizarding World of Harry Potter – Diagon Alley doubles the size of the sweeping land already found inside Universal’s Islands of Adventure theme park, adding Universal Studios there, as well.