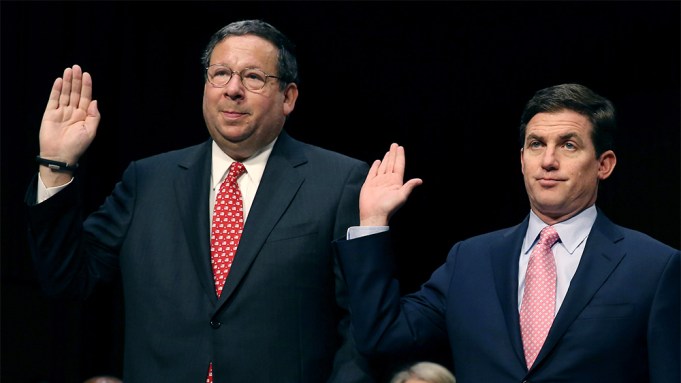 Senators grilled Comcast and Time Warner Cable executives on an array of competitive concerns over their proposed merger at a Capitol Hill hearing on Wednesday, but one of the most frequently asked questions was very simple: Will consumers see higher monthly bills?

“I will make one firm commitment that there is absolutely nothing in this transaction that will result in an increase in prices for Comcast customers,” David L. Cohen, executive vice president for Comcast.

The testiest exchange during the three-hour session — the first major public forum for pols to weigh in on the deal that would unite the nation’s two largest cable operators — came between Cohen and Sen. Al Franken (D-Minn.), who has been a vocal critic of the merger. Franken pressed Cohen on specifics about Comcast’s dealings with various competitors and the FCC in the three years since it was granted approval to take over NBCUniversal.

The questions posed by Franken and other members of the Senate Judiciary Committee reflected increasing consumer gripes over rising monthly bills, in many cases well above the rate of inflation. Time Warner Cable, for instance, instituted across-the-board price increases in the past month across an array of channels and services that have seen some customers rates rise as much as 9%.

But Cohen said that the rate increases reflect the rise in the cost of programming, particularly sports rights.

In fact, on the day the merger was announced in February, he told reporters that “we’re certainly not promising that consumer bills will down or increase less rapidly.” His statement to the Senate Judiciary Committee does not foreclose a price increase, just that the merger of the two companies would not be responsible for driving it.

Cohen several times outlined what he said were the consumer benefits of the transaction, including upgrades in technology, increase in broadband speeds, more innovation in video platforms and access to an expanded array of on-demand programming. He said that the deal would allow Comcast to realize greater scale that will enable it to better compete with satellite, telecom and online rivals.

As he has said before, he noted that Comcast would command less than 30% of the cable market and less than 40% of the broadband market.

“Objectively, this is not a challenging transaction from an antitrust perspective,” he said.

Franken was the only member of the committee to explicitly say that he was against the merger, noting that he has heard from some “100,000 consumers who oppose the deal.” He has expressed opposition from the start, and has linked to a petition on his campaign website.

Although Cohen has repeatedly stressed that Comcast would not be combining with a competitor for cable or broadband in any are of the country, “what he is really saying is these companies that control many local markets want to become a larger company that controls the national market,” Franken said.

Franken questioned whether a bigger Comcast would have the incentive to add more products, and cited some of its executives’ bullish outlook on its revenues to Wall Street analysts given its ability to bundle services.

He even sparred with Cohen over the nature of an FCC fine imposed on Comcast for promoting its bundling packages but obscuring its availability of standalone broadband service.

Cohen said that the bundling was “an effective strategy and one that consumers like.”

Franken was joined in his opposition to the merger by Gene Kimmelman, the president of media watchdog org Public Knowledge and a former antitrust official at the Justice Department. Kimmelman testified that the combined company will give Comcast “enormous power” in leverage to command favorable program carriage pricing or demand higher rates for the channels that it owns.

The Judiciary Committee has oversight over the Justice Department, which is reviewing the proposed merger, but its members do not have an up or down vote on whether it is approved. The FCC also is reviewing the combination.

Nevertheless, the scrutiny from the committee is a traditional public relations hurdle that any company faces for a major acquisition.

That was on display as Sen. Patrick Leahy (D-Vt.), the chairman of the committee, cited reports that Time Warner Cable CEO Rob Marcus and CFO Arthur Minson stood to make $80 million and $27 million, respectively, if the merger goes through.

“Do these golden parachutes help your shareholders?” Leahy asked Minson, who was testifying.

After giving an answer and avoiding the question, Leahy asked him again.

“As it relates to the overall compensation packages from transactions of this size and this complex I think you will find they are in line,” Minson answered.

Leahy repled that he “was not sure consumers would agree with you.”

Sen. Richard Blumenthal (D-Conn.) said that there was a “high degree of skepticism” from senators on the committee toward the merger, and pointed in particular to both companies’ command of sports rights in local markets via regional sports networks.

He said that the RSNs “give your companies both the means and the incentive to overcharge your rivals.” He pointed to Time Warner Cable’s rights to the Lakers in Los Angeles and the reports of stalled negotiations with rival DirecTV to carry the Dodgers regional sports network.

But Cohen said that there was “really nothing in this transaction that changes the competitive dynamic for sports in this country.”

“Whatever the competitive dynamic is today…will be exactly the same,” he said. “We are not going to have any more power in the Los Angeles market to negotiate different deals.”

Blumenthal said that Comcast will be a “bigger entity with more economic power over other programming” that “increases its strength to withstand hostile negotiations.”

Cohen, however, said that multichannel video distributors have a right to demand arbitration in such disputes over regional sports networks, but none have so far.

Another issue is the impact that the merged companies would have on the ability of independently owned cable channels to launch.

James Bosworth, chairman and CEO of startup golf channel Back9Network, said that their ability to command viable advertising rates depends on getting carriage on Comcast and TW Cable because they are in the top markets that sponsors want to reach.

“New channels need permission to compete from one of the two cable providers,” he said.

Although talks with TW Cable had been productive, he said that ended when the merger was announced with Comcast, which owns Golf Channel, a rival.

Sen. Amy Klobuchar (D-Minn.), who chairs the antitrust subcommittee, said that she and other senators have heard from other media companies expressing concerns over the merger, but they did not want to go public out of fear of risking their bargaining position.

Cohen, however, defended Comcast’s commitment to independent channels, noting that they have expanded carriage to 120 independent programmers over the last three years.

Moreover, he said, the trendlines are toward “a video-on-demand world,” rather than as one entity serving as a gatekeeper for the channels and content that is carried.

Yet there has been substantial legal wrangling over just what the program carriage rules protect. After the FCC ruled in favor of Tennis Channel over where Comcast places it in its channel tiers, Comcast sued and won in the D.C Circuit, which overturned the agency’s decision.

Cohen, meanwhile, argued that Comcast faces a “fiercely competitive broadband marketplace across our entire footprint,” noting that 98.4% of Comcast and Time Warner Cable customers will have a choice between them or at least one other major Internet providers.

“There is a virtuous investment cycle that is going on here,” he said.

He was supported in that sentiment by Sen. Orrin Hatch (R-Utah), who noted that telecom firms are upgrading their DSL service.

Where Cohen did concede Comcast needed to improve was on customer service, saying that “we are deeply disappointed as to where we are.” Nevertheless, he said that they made substantial gains in a J.D. Power & Associates survey.

(Pictured: Comcast’s David Cohen and TW Cable’s Arthur Minson being sworn in at the hearing)