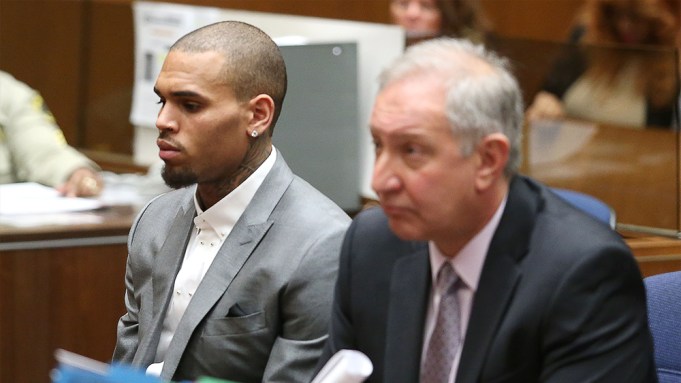 LOS ANGELES (AP) — After a weekend in jail, Chris Brown is facing a court hearing over his dismissal from rehab and whether he should be given additional penalties, which could include more time behind bars.

The Grammy-winning R&B singer spent the weekend in a downtown Los Angeles lockup after a judge ordered him to be arrested for violating the rules and regulations of his treatment. Court records did not elaborate on the reason for Brown’s dismissal from the facility in Malibu that was treating him for anger management, substance abuse and issues related to bi-polar disorder.

Brown, 24, had been under court orders to remain in treatment since November, one month after he was arrested in Washington, D.C., after a man accused him of punching him in a confrontation outside a hotel. That case remains pending, and Superior Court Judge James R. Brandlin has not yet scheduled a probation violation hearing to address whether he would penalize the singer for the arrest.

His attorney Mark Geragos did not return an email message seeking comment on the singer’s arrest. Prosecutors have not said what action they plan to take at Monday’s hearing.

Brandlin revoked Brown’s probation in December, but refused a prosecutor’s request in February to send the singer to jail because of the Washington misdemeanor assault case. The judge has said Brown appeared to be making good progress in rehab and a probation officer gave him a favorable report at his last court hearing on Feb. 28.

The singer’s arrest last week represents another stumble in his efforts to put his 2009 attack on then-girlfriend Rihanna behind him. Brown’s probation had been scheduled to conclude in August, but that is now unlikely because he still has 750 hours of community labor to complete and could face additional penalties for failing to complete rehab successfully.

Brown pleaded guilty to felony assault for attacking Rihanna, leaving her bruised and bloody just hours before the 2009 Grammy Awards. Both singers skipped the ceremony, with Brown turning himself in to police. He returned to the awards show years later, winning a Grammy for Best R&B album in 2011 for his release “F.A.M.E.”

At his sentencing in August 2009, Brown was warned that he could face prison if he violated the terms of his probation, but any penalties he faces will be decided by Brandlin.