There May Be Big Bucks in Film, TV and Sports, but There's Nothing Like Consumer Products to Boost Incomes 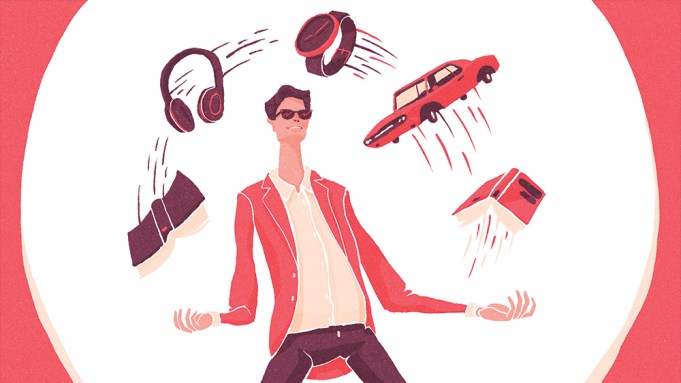 Branding is such an overused buzzword in today’s Hollywood that some might forget that the concept is relatively new when applied to talent. But business manager Harley Neuman doesn’t need to be reminded.

“When I started my business 24 years ago, the word brand was not even in the vernacular,” says Neuman, founder of Neuman+Associates. “Now, I hear it every day. The entire team, from agents, managers and publicists to attorneys and business managers, is looking at their clients and figuring out what their brand is and how to maximize its value. Those are conversations that didn’t even happen five years ago.”

The cause is easy enough to pinpoint: film and TV salaries and studio deals have declined over the past few years and music sales have been in a free fall. “People need to adjust their expectations or diversify,” says Dian Vaughn of Nigro Karlin Segal Feldstein & Bolno. “A lot of clients have become really good at diversifying.”

That often means leveraging one’s personal brand to promote a corporate brand. If the company in question is a start-up company, celebrities are often given a choice between an upfront fee, an equity stake in the company or a combination of both. Which one to take depends on the individual star’s financial situation.

“If somebody’s already set, then you don’t have to get your big pop upfront and you can hope for a big backend,” she says. “And if somebody’s a little more in need of cash, then I would rather get more cash upfront. It really depends on the client.”

NBA star LeBron James reportedly earned $30 million from his equity stake in Beats Electronics when it was sold to Apple for $3 billion earlier this year, and New York Mets third baseman David Wright received a 0.5% equity stake for his endorsement of Vitamin Water, which sold to the Coca-Cola Co. for $4.1 billion in 2007.

“(Clients) hear these things, and they think, ‘That’s what I want … because that’s what’s going to earn the big bucks,’” says Eric Fulton of Fulton & Meyer. “But I always have that balancing act of then saying, ‘OK, but since you’re not taking the cash upfront, you can’t go and buy this $4 million house. You need to wait until your next project.’ It’s a risk. If they’re willing to accept that there’s a high probability that things won’t go the way they hope, then that’s fine. But don’t hold it against me later.”

Fortunately, their large and loyal followings in the millennial demographic make them valuable to advertisers, who are increasingly cutting deals with them to make videos with brand integrations. Many are now signing book deals, including Grace Helbig, who scored a No. 1 New York Times best-seller last month with “Grace’s Guide: The Art of Pretending to Be a Grown-Up.”

“They build a fanbase, almost in some ways inadvertently, then suddenly they see they’ve got 14 (million) to 16 million people watching them and they think, ‘I can sell T-shirts. Maybe I can lend my name to this or do an appearance or come out with my own game,’” says Fulton, who has several clients who are YouTube stars, including Jenna Marbles, Toby Turner and Rhett & Link. “It’s interesting how they’re all figuring it out as they go, literally, because it’s so new.”

Traditional TV and movie stars have caught on, too. “I have clients working on TV shows who are tweeting while they’re shooting,” Neuman says. “It’s a big part of how people reach an audience these days. If you don’t go with the trends, you’re left behind.”