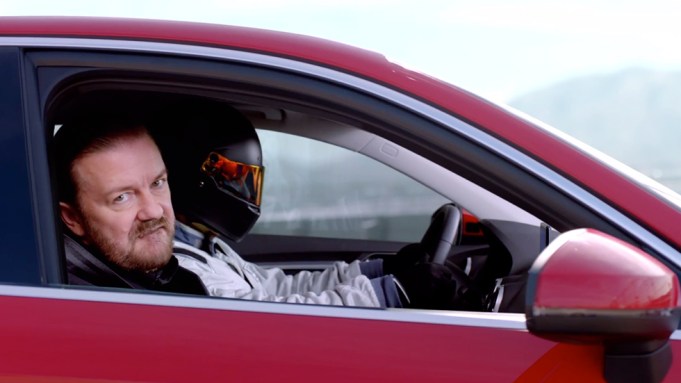 To launch its new A3 sedan, Audi of America is turning to Ricky Gervais to drive home the message that consumers should never compromise.

To hammer home the message, it cast Gervais, a comedian who is often blasted by critics for his acidic sense of humor and jokes.

Gervais is featured in an overall branding campaign called “Dues,” and a separate shorter spot called “Names,” as well as in a series of “Uncompromised Portraits,” in which he discusses his process of telling jokes.

During his profile, he reflects on his three years of hosting the Golden Globes, and the media attention over what were considered offensive jokes directed at celebrities in the audience.

“The reaction after the Golden Globes was weird,” he says in the video. “You usually have to be a mass murderer for that sort of column inches, but then by the end, you know, they sort of got it. Oh, I get it, he’s just telling jokes.”

In “Names,” Gervais spends the 30-second spot listening to a child sitting in the back seat read aloud disparaging tweets about him, as a way to showcase the technology inside the A3 like built-in 4G LTE Internet connectivity that turns the car into a WiFi hotspot.

And in the 60-second “Dues” commercial (see above), Gervais, along with celebrity chef David Chang, photojournalist Lynsey Addario, comedian Kristen Schaal, boxer Claressa Shields, street artists Cyrcle and inner city church choir Voices of Destiny recite lines from “We Are the Champions” by Queen, meant to serve as a rallying cry for the “uncompromised” nature of those who never settle.

The campaign launched during March Madness.

Audi has turned to celebrities before in its campaign to promote its newest vehicles, hiring Claire Danes to reference her “Homeland” character in a campaign that launched around last year’s Emmys. Audi is the automotive sponsor of the Television Academy and the Emmy Awards.

“Audi has a long-standing strategy of connecting vehicles with films, TV shows, and other entertainment-driven events that get people talking,” said Loren Angelo, director of marketing, Audi of America. “By featuring some of entertainment’s biggest names in our marketing campaigns, including entertainer Ricky Gervais, as seen in the recent Audi A3 ad spots, Audi has become one of the most culturally relevant brands today.”