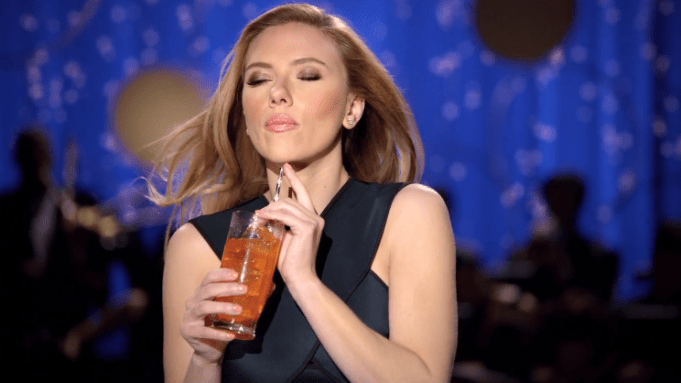 Marketers love a good controversy, and SodaStream is taking advantage of a few rules from the NFL that will prevent an initial cut of its $4 million commercial from airing during the Super Bowl. The flipside, its uncensored ad could be watched by more people online even before this weekend’s big game.

In the spot for the maker of home soda machines, Scarlett Johansson stands with the device while wearing a robe.

“If only I could make this message go viral,” Johansson says before dropping the robe and taking a stage to provocatively sip on the drink she just made.

The spot ends with her saying, “Sorry, Coke and Pepsi.”

And that’s where the NFL tossed the penalty flag.

With Pepsi sponsoring the halftime show, Fox, which is broadcasting the game, asked SodaStream to edit the ad and eliminate the last line. The edited version will now air during the match up between the Seattle Seahawks and Denver Broncos on Feb. 2.

“This is the kind of stuff that happens in China. I’m disappointed as an American,” SodaStream CEO Daniel Birnbaum told USA Today, after claiming Fox and the NFL were afraid of Coke and Pepsi.

SodaStream has been in this position before, when its planned Super Bowl spot that included shots of a Pepsi and Coke delivery truck was also banned.

But SodaStream could benefit from its fumble in a big way.

With short-form videos finding massive audiences online, SodaStream could have a huge hit on its hand with its banned spot. Already, the uncensored version has been viewed nearly 1.7 million times on its YouTube page.

Looks like Johansson and SodaStream will get their wish of going viral after all.