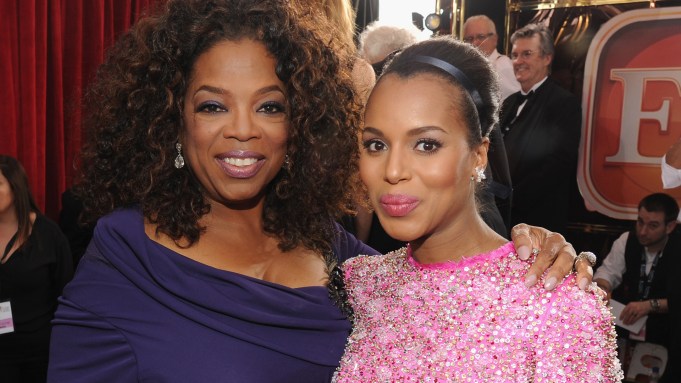 There must have been a memo. Sandra Bullock, Oprah Winfrey, Julia Roberts, Jennifer Garner, Sofia Vergara, Jennifer Lawrence, Anna Gunn, Lupita Nyong’o and Amy Adams were among the thesis who chose bold solid colors for their trip down the SAG Awards red carpet.

But one of the biggest head-turners on the carpet this year was “Game of Thrones” star Natalie Dormer, who showed off her half-shaved head for her role as Cressida in “Mockingjay,” the final two “Hunger Games” pics.

Dormer disclosed that she’s been hiding her hairdo (with carefully applied hairpieces) for the past few weeks, waiting for the right time to show off what isn’t there on the right side of her head. It was nerve-wracking to shave it, especially as she still has long flowing locks on the other side.

“I just kept touching it after it was done, I couldn’t believe the texture,” she said. Working on “Game of Thrones” has its similarities to working on HBO’s “Thrones” in one key regard.

“Both have gifted production designers and art directors working on the films,” she said. “It makes a difference.”

Another person who was hard to miss on the carpet was Lavell Crawford, aka Huell from “Breaking Bad.” The fate of his character was never definitively spelled out in the show’s finale, and as far as Crawford’s concerned, Huell made it.

“I think he snuck out of that hotel,” Crawford said. “I think he ran out of food and the cable didn’t work and he left.”

Crawford’s been busy the past few months doing guest shots on “The Crazy Ones,” “Super Fun Night” and the feature “Evil Nature.” And he has a pretty good feeling about his chances to be part of the “Breaking Bad” prequel “Better Call Saul.”

“We haven’t signed any paperwork but I believe it will happen,” he said.

Mandy Patinkin hit the SAG Awards fresh from Sundance, where he was there to tubthump Zach Braff’s “Wish I Was Here.” He changed into his tux in the Delta lounge at the Salt Lake City airport.

He hasn’t taken much of a break since “Homeland” wrapped last year. He did a musical tour in Australia and New Zealand and a stage show in Gotham, “The Last People on Earth,” which he’s now ready to tour.

He’s anxious to get back to work on “Homeland” and no, he has no idea what’s coming next.

Two generations of Derns — Bruce and Laura — made the SAG scene. Bruce noted that Laura starred in Alexander Payne’s first movie — 1996’s “Citizen Ruth,” but he had to wait for Payne pic No. 6 to get his turn in “Nebraska.” The affection between father and daughter was palpable as Laura gently guided him through the madness of the carpet.

“Excited, humbled and truly blessed” — that’s how Michael Kenneth Williams described his experience on “Boardwalk Empire last season when Jeffrey Wright joined the cast and Lou Gossett Jr. joined up for a fab guest shot. “It just doesn’t get better than that,” he said.
Meanwhile, Steve Buscemi said he was hopeful that his Nucky Thompson character manages to patch up a very big misunderstanding with Williams’ Chalky White character in “Boardwalk’s” final season this year. “It’s bittersweet” to be heading into the show’s swan song year, Buscemi admitted.

“Veep” troupers Reid Scott and Matt Walsh gave us a glimpse of how the HBO series is shot in a most unusual way. “It’s a bit like theater camp,” Walsh said. The scripts come in, the actors do several table reads and contribute suggestions, drafts are revised, rehearsals are held and then they wind up improv-ing still more when the cameras roll. “We play it fast and loose,” Scott said.