L.A. Mayor Expects Incentives Bill to Provide Around $400 Million Per Year for Movies and TV 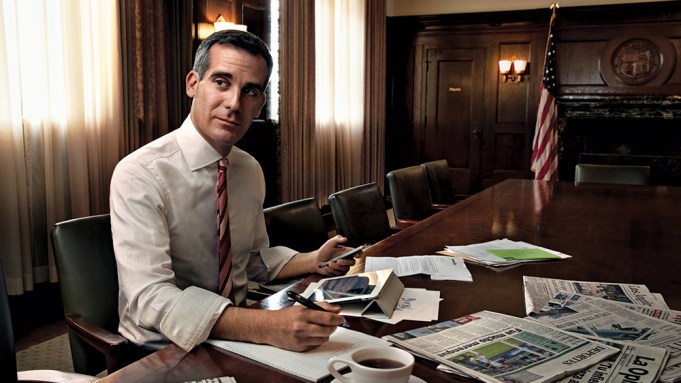 Photograph by Art Streiber for Variety

Los Angeles Mayor Eric Garcetti said that he expects the authors of film and TV tax credit legislation to insert a figure “that is north of $400 million” per year, an amount that would put the state about on par with New York.

“It will be close to $400 million or just north, right around there,” Garcetti said at Burbank Airport, where he had just arrived after a trip to Sacramento to lobby Gov. Jerry Brown and state legislative leaders on the need to pass legislation that greatly expands the existing program, which is currently at $100 million per year. He said that he expected the figure to be inserted into the legislation by Monday.

The bill, AB1839, has so far passed the state Assembly with unanimous support and is making its way through the Senate, but so far with no figure attached. It would extend the existing program through 2022 and expand eligibility to include bigger budgeted feature films and most one hour-drama series, production categories that have been lost to other states in recent years. The legislation, authored by Assemblymen Raul Bocanegra (D-Pacoima) and Mike Gatto (D-Los Angeles), comes before the Senate Appropriations Committee on Thursday.

Even with a figure in the bill, there is still the question of whether such a sum will garner the support of Brown. Garcetti and six other mayors met with the governor and pressed for a significant amount, but it is unknown whether he would sign a bill at that level.

“He knows I would like a number that is competitive with New York state,” Garcetti said. “New York state is in the north of $400 million range. To us, that is very important. For us to do something that is token doesn’t stop that decline. If we get a big enough number, I think we can win this war. I think we can bring production back. I think we can see pilots starting up here, which means that shows will stay here.”

Nevertheless, when it comes to the legislation, “I wouldn’t be naive enough to say that the governor is going to come down on that exact number. But I have just watched the evolution, where this governor understands that this is a key industry, where he and his staff have told us privately we are not going to preside over its decline, and where understands it is no longer just a Southern California issue. … This governor gets it.”

Garcetti also suggested that such an amount also may enable phasing out of the program’s lottery system. Discussions are ongoing about possible amendments to the legislation and state Sen. Kevin de Leon, chairman of the Appropriations Committee, has indicated that he would like to see that issue addressed.

“A lot of people don’t apply for these credits because it is just a random lottery,” Garcetti said. “We did calculations, and if we have approximately $400 million of credits and it wasn’t on a lottery system, almost every television program and movie that applied for it that wound up getting made would have benefited from it. Everyone that left, in other words, would have been in California. That is pretty powerful testimony and a pretty powerful statistic.”

At the meeting with Brown, it wasn’t Garcetti who first brought up the topic of runaway production but San Francisco Mayor Ed Lee, underscoring that the problem is not exclusive to the L.A. area. The legislation provides an extra 5% credit to productions that shoot outside a 30-mile radius centered in Los Angeles, a provision intended to win support of lawmakers outside the region.

Garcetti said at the meeting, Brown mentioned “a lot of people are talking about a very big number.” Garcetti said he argued that the state will see a program that can quickly produce “tens of thousands of jobs” and “billions of dollars” in production activity.

At a press conference after the meeting, Lee noted that the upcoming movie “San Andreas” shot just four days in San Francisco, even though the movie is set there. “It is quite a bit of lost income and quite a bit of lost revenue for small businesses,” he said.

Garcetti noted that production of drama pilots has plummeted, with just three shot in the state for the most recent season, compared to 85% of all such pilots just a few years ago.

“That is a preview of coming attractions if we don’t get our act together,” he said.