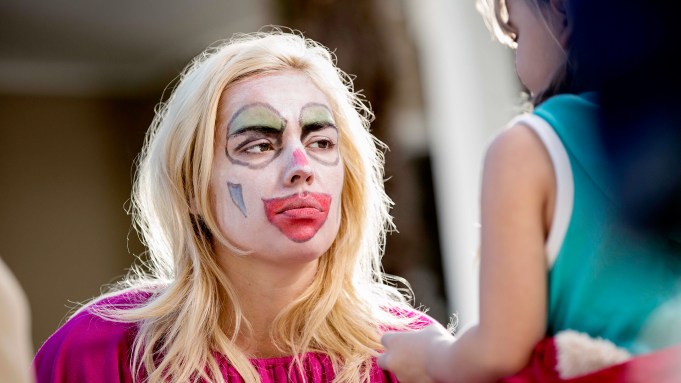 “Anna Nicole” isn’t really about anything in the conventional sense, but still manages to be as hard to turn away from and vaguely sleazy as its namesake, which should suit Lifetime’s purposes just fine. If nothing else, the movie appears destined to win some kind of award for most convincing prosthetic cleavage, allowing Agnes Bruckner to play the Playboy and Guess jeans model in her pre- and “build-on” breast stages, flanked by a perfectly cast Martin Landau and Adam Goldberg as the unlikely men in her life. As guilty pleasures go, this one certainly doesn’t lack for moments at which to hoot.

One suspects director Mary Harron (working from John Rice and Joe Batteer’s script, itself adapted from a New Yorker article) essentially told her cast that chewing scenery would not be frowned upon here. So she elicits a florid performance from Virginia Madsen as little Vickie Lynn’s oft-married Texas mom, before her daughter blossoms into a single mom herself, turns to stripping to pay the bills and adopts the name Anna Nicole.

Surgically enhanced in the hope of boosting tips (get your minds out of the gutter, people) at the club, she encounters billionaire J. Howard Marshall (Landau), an almost tragic figure who’s preparing to go home — why watch someone barbecue steaks, as it were, if you can’t even chew them? — when he espies Anna Nicole, and is struck like the proverbial thunderbolt.

“You make me feel like I’m 75 again,” the octogenarian tells her, as he begins showering gifts upon the dancer, much to the chagrin of his son (an almost unrecognizable Cary Elwes), who does all he can to chase away the gold digger — who insists on creepily calling her self-proclaimed sugar daddy “Paw Paw.”

A nude photo spread, meanwhile, propels Anna Nicole into the fast lane of champagne wishes and Xanax dreams, with Guess hailing her as every man’s fantasy. Bouts of drinking and drugs follow, as her young son (Graham Patrick Martin) grows increasingly troubled.

Those excesses eventually cause Anna to lose her endorsement gig and agents, but alas, into the breach steps attorney Howard K. Stern (Goldberg), an awkward figure who drops everything to become her personal valet, although his sexual cravings appear somewhat unorthodox.

Ultimately, it’s just another variant on “A Star Is Born,” only without much arc other than the character’s untimely death. And while some of the movie’s choices are highly suspect — starting with having the deceased Anna Nicole narrate her story — they will matter not a whit to a Lifetime audience hardly trained to anticipate high art on its Saturday nights. Besides, what’s not to like when a mom practices her pole-dancing moves at her young son’s tetherball court?

Like Anna Nicole’s original endowments, there’s a not-so-subtle commentary about the price of fame and notoriety buried within the movie — especially as glimpsed through Smith shooting her short-lived E! reality show — but “Anna Nicole” is too preoccupied with its surface trappings (which Bruckner embodies admirably) to fret much about what’s underneath all the hair spray and rouge.

Lifetime’s latest sensational biopic comes a week after its Jodi Arias telefilm, and however distasteful the material, for those in the depleted TV movie business, it’s hard not to be grateful for the work. Besides, as Kim Basinger’s similarly platinum-dyed hooker muses in “L.A. Confidential,” “We still get to act a little.”