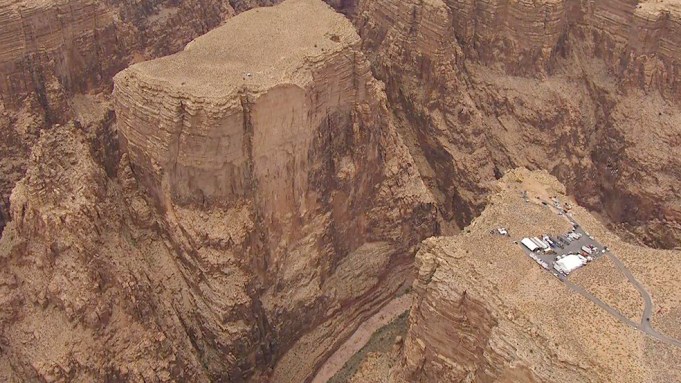 To broadcast a show in which a daredevil tightrope walker might fall while attempting to cross the Grand Canyon, you’ve got to have a strong stomach. And, as it turns out, you might need skills in negotiating with Native American Indian tribes, the ability to build a road in three weeks and the moxie to rappel down 1,500 feet to set up a camera.

Discovery Channel’s recent June 23rd broadcast of high-wire artist Wallenda’s feat (reminiscent of ABC’s 1970s-era telecast of an Evel Knievel motorcycle jump)  is being billed as a success for the cable network: The live telecast captured approximately 13 million viewers, according to Nielsen. And it provides ammunition for those TV nets who want to use “live” programming other than sports to help goose viewership in an era when couch potatoes can record whatever they like and play it back at their convenience.

Yet as the preparations for the Discovery event reveal, live stunts bring challenges all their own. Peacock Productions, the NBC News unit that puts together docuseries, reality programs and events for TV networks and others, spent over a year discussing the idea with Discovery and planning the production, said Sharon Scott, president and general manager of the unit.

The Power of Live

Live TV helps to shake up a network’s programming routine, said Eileen O’Neill, group president for Discovery and its sister cabler, TLC. Such shows represent “a big breakthrough” for media companies trying to thwart behavior sparked by the presence of DVRs, she said, and they also help TV outlets reach viewers more deeply, thanks to the response they spark on social media. “We truly felt we knew everyone’s living room was talking to the next living room down the block as people tweeted and discussed and posted,” she added.

TV has always had its share of live broadcasts.“Saturday Night Live” is a boob-tube staple and the most gripping moments from TV news outlets come during live-on-the-ground coverage. Shows like “30 Rock” and “E.R.” have attempted to give viewers something new to talk about by testing out episodes performed live. But as more viewers are able to record their favorite programs with a DVR and watch them hours or days later; call up video entertainment on demand; or stream it at a time of their choice, TV networks find the economic underpinnings of their business being steadily eroded. Devising new ways to draw big hunks of audience in a single swoop has become more urgent, and live telecasts of unusual content may be one method that gets more use.

“As expensive as these events are becoming to produce or acquire, networks need alternatives to other premium ‘live’ programming genres that are also expensive and finite in supply, such as the NFL or the Academy Awards,” said Christopher Vollmer, leader of the global media and entertainment practice at consultant Booz & Co. He sees live broadcasts of “events” and “stunts” as “a growth area and a priority for development – networks will focus on new ideas and concepts so will agencies and independent producers. Discovery appears to be the gold standard so far. As long as the new ideas keep coming, the viewers will too. We’re still in the early days of the development cycle here.

As Peacock Productions’ set-up for the Discovery Wallenda event illustrates, however, these spectacles may come with a bevy of tough-to-surmount elements. Gretchen Eisele, executive producer for Peacock, found herself having to construct a production virtually in the middle of nowhere, a piece of land under the authority of the Navajo nation that was so remote that a trip to a real bathroom required a 15-mile drive. Construtcing the road alone cost $250,000, according to Peacock. The team had to secure limited air rights around the site in case a pilot wanted to saunter above and try to get a look during Wallenda’s walk, said Howard Swartz, Discovery’s veep of production and an exec producer of the show.

Meanwhile, the Navajo were concerned Wallenda’s event might damage an important spiritual shrine, and also expressed concern the nearby Hopi tribe might have authority over other elements of the site, Eisele recounted. Cameras had to be mounted below the tightrope and positions planned in the airspace above and around Wallenda.

“It was more complicated to pull off than we thought,” Eisele said, with the shoot requiring around 20 visits overall from different parts of the production crew in advance of the live telecast.

Talent added another wrinkle. Peacock was able to secure “Today” hosts Natalie Morales and Willie Geist for the broadcast, but they also needed to appear on the morning program. The hosts arrived late on Thursday and left the Monday after the Sunday broadcast – and had to get up at 1:30 a.m. local time in order to prepare for appearances for the East Coast morning talker. Plans included a potential opportunity for the hosts to pose questions to Wallenda while he walked, but the daredevil scrapped the notion early in his attempt.

Even setting a watch proved difficult. The site for the Wallenda shoot ended up being in a different time zone than the Flagstaff, Arizona, hotel where the crew was staying.

None of this will deter Discovery from trying its hand again with a similar program if the right idea presents itself, said O’Neill. “We like ‘live’ if we can find the right story or event,” she said. So might several others.