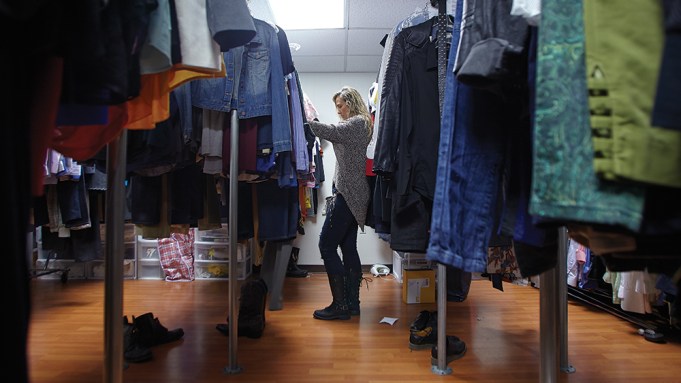 From the outside, Telemundo Studios looks like a nondescript warehouse on a side street in Hialeah, Fla.

The production facilities hum nearly ’round the clock, thanks to the mandate to turn out hundreds of hours of telenovelas a year for the Spanish-language network owned by NBCUniversal. It’s a sopa-to-nuez operation, with everything from writers rooms and casting offices to miles of wardrobe racks and post-production equipment housed within two-story buildings.

Perhaps the most telling resource on the Telemundo lot these days is tucked away in an alley that runs between the stages. It’s small but significant: a New York street set built for the production of the 2012 novela adapted from the 2002 Jennifer Lopez movie “Maid in Manhattan.”

The homegrown production boom at Telemundo reflects the company’s move during the past two years to make a 90-degree shift in its programming strategy, focusing on novelas and other shows produced in Spanish but with U.S. sensibilities. That means more soaps set in places like Miami, New York, Los Angeles and Chicago, and far fewer imports from novela factories in Latin America.

The strategy, led by Telemundo Media prexy Emilio Romano since his arrival in 2011, gives the company much greater control over its primetime lineup, and has had the added benefit of expanding its international distribution business. Telemundo has long faced a Hertz-Avis style battle in its competition with the larger and more successful Univision for a slice of the domestic Spanish-lingo TV audience. With that market growing rapidly, Romano sees a clear path for Telemundo and its cable sibling Mun2 in appealing to viewers who see themselves as increasingly bicultural.

“We create original content by U.S. Hispanics for U.S. Hispanics,” Romano says. “We become closer to our audience by reflecting the feelings and emotions of people living in this country. We’re the Spanish-language media company that produces the most primetime programming in the U.S. We have been capturing an increased share of the audience, and that gives us comfort knowing that our strategy is working.”

Telemundo has been riding a ratings wave for the past two years that started with its runaway hit novela “La reina del sur” (“Queen of the South” — think Pablo Escobar in a micro-miniskirt). This year, it has scored with novela “La patrona” (a woman fights naysayers to take over a mining company) and reality skein “La Voz Kids,” a Hispanic family-friendly spin on NBC hit “The Voice.”

“Voz” has averaged 2.16 million viewers a week since its May 5 debut. The decision to tweak the format from the NBC rendition by focusing on moppet contestants was a calculated effort to encourage family viewing, which has paid off.

Among the many original series in the works for Telemundo are an Espanol take on “Top Chef” and a gameshow from Ryan Seacrest’s production company.

But as much as Telemundo is branching out into nontraditional genres, Romano and his team know all too well that the backbone of the network remains its primetime telenovelas — the hourlong serials that run Monday to Friday, usually for 24-32 weeks. The shows do not repeat, which means the network demands a plentiful pipeline of product, with new 8 p.m., 9 p.m. and 10 p.m. entries launching year-round on a staggered schedule. They go head-to-head with Univision’s staple of four novelas that air Monday-Friday, starting at 7 p.m.

Because telenovelas are so central to TV throughout Latin America, the competition among networks to lock up exclusive deals with top producers and studio suppliers is fierce. The battles between Mexico’s Televisa and TV Azteca are legendary (over novela assets, among other things).

Univision has deep ties to Televisa (which owns about 38% of Univision) and thus has a lock on its prolific output of hits. Univision has leveraged its clout and affiliation with Televisa to ensure it has exclusivity from major players like Venezuela’s Venevision and Colombia’s Caracol TV.

Faced with the problem of finding consistent sources of high-quality programming, Telemundo opted to provide an inhouse solution, ramping up a production operation that now delivers more than 750 hours of novela programming a year through the Miami studio and another production facility in Mexico.

Telemundo’s programming team frequently draws on existing formats from outside producers for source material, but these are reversioned for a U.S. sensibility, with an emphasis on the Mexican experience, because that is the single largest component of the U.S. Latino population (about 63% according to the 2010 U.S. Census).

Contrary to the assumptions of many mainstream media execs, Spanish-speaking viewers are hardly monolithic. Dialects, attitudes and conversational conventions vary widely according to region. And there’s a melting-pot effect that comes over time for immigrants and their second-generation offspring.

Joshua Mintz, exec veep of scripted programming and general manager of Telemundo Studios, says the network produces different kinds of novelas that most often reflect the color, sound and flavor of Mexico, but are balanced with the reality of life in the U.S. “The fact that we have the capacity to produce five to six novelas a year now is really amazing compared to where we were a couple of years ago,” says Mintz.

NBCUniversal’s willingness to invest in making Telemundo more competitive in its battle against Univision and other outlets vying for Hispanic auds has been a spark for the domestic Spanish-language marketplace. Univision also has been on an expansion push, with plans to launch Fusion, an English-lingo news-and-lifestyle network with ABC News later this year, and investing in Robert Rodriguez’s startup, English-lingo entertainment channel El Rey.

“There hasn’t been a better time in U.S. Hispanic TV history than now, with more programming options, formats and networks in the market,” says Luis Balaguer, partner with Sofia Vergara in Latin World Entertainment, which recently received an order from ABC for a drama, “Killer Women,” that’s based on an Argentine format.

The growing prominence of Spanish-language TV in the U.S. was underscored July 23 when Univision staged a premiere event for its novela “La Tempestad” at Universal Studios’ CityWalk in Los Angeles. Thousands of fans turned out to swoon over star William Levy, the hunky Cuban leading man who is a novela vet, but known to English-speaking viewers from his recent stints on ABC’s “Dancing With the Stars” and VH1’s “Single Ladies.”

Telemundo and others estimate that about 24 million-25 million people consider themselves Spanish-language dominant, making them the bull’s-eye of the target for Spanish-lingo media.

For the 2012-13 season to date (which is a September-to-September cycle for Univision and Telemundo given the no-repeats paradigm of novelas), Telemundo is averaging 1.43 million viewers in primetime (780,000 in the adults 18-49 demo), up from 1.21 million in the same period in 2011-12. Univision is averaging 3.66 million viewers (1.8 million in adults 18-49), up slightly from the year-ago period (3.61 million). Clearly, there is room for both nets to grow, even as the national Latino TV market gets crowded with the recent entry of Fox’s MundoFox and indie EstrellaTV.

Nielsen estimates there are about 15 million “upscale Latinos” with household incomes of $50,000-$100,000. Three quarters of those speak both English and Spanish, and more than one-third consume media content in both languages. They’re typically younger than their upscale white counterparts (a median age of 33 compared with 39 for whites) and the majority of them have young families (85% have a household size of three or more), according to Nielsen.

In short, they are an advertisers’ dream demo — consumers in need of everything from diapers and washing machines to life insurance and financial planning services. And maybe the occasional cruise or trip to Disney World.

Advertising spending on local and national Spanish TV outlets is still a fraction of the overall TV advertising pie — accounting for about $6 billion of the $74 billion spent on TV in 2012. But that was up 15% from 2011, compared with an 8% year-to-year gain for the overall TV ad market, according to Kantar Media estimates. Ad rates, however, for Spanish-lingo TV spots remain significantly lower than in the general market, which is a sore spot for execs, given the desirable youthful composition of the audience.

Romano came to Telemundo with a studied understanding of Hispanic consumers in the U.S. He ran Mexicana Airlines from 2004-07, and before that was a top exec at Mexican media giant Televisa in the 1990s. During that time, he served on the board of Univision, in which Televisa has long been a major shareholder.

“At that point in time, there was a lot of doubt about the future of Spanish-language TV in the U.S. People thought it was a fad and that we’d all be watching English-language TV eventually,” says Romano, a native of Mexico City who now lives in Miami. “The business,” he adds, “has never been so healthy and growing at such a fast pace.”

Romano had been out of the media biz for a few years before he got the call in 2011 from NBCUniversal CEO Steve Burke to come help make Telemundo a more hearty competitor to the long-dominant Univision. Romano did not hesitate. He sees NBCUniversal as uniquely well positioned to reach Latino auds of all demos and language preferences thanks to Telemundo and the Peacock’s strong collection of cable nets.

To that end, NBCU in April recruited former Univision CEO Joe Uva to oversee a newly created Hispanic Enterprises and Content arm charged with expanding NBCU’s reach and relevance to Hispanic auds across its news and entertainment platforms.

Telemundo and Mun2 are centerpieces of that effort. Although Mun2 has experimented with running English and Spanglish programs in the past, Romano believes the focus is best kept on speaking to viewers en Espanol to grow its core audience.

The network learned an important lesson about what viewers want from Telemundo — and what they don’t want — with its experiment in 2010 in carrying a few NFL games featured on NBC’s “Sunday Night Football,” but with a different in-studio team.

The turnout for the telecasts (which ran on its stations in five top markets) was anemic: Hispanics who are interested in football want to watch Al Michaels and Co., just like other gridiron fanatics. Now, Telemundo sports anchors provide the Spanish simulacast feed for NBC’s football telecasts.

Meanwhile NBCU is investing in sports rights for Telemundo, outbidding Univision for Spanish-lingo TV rights to the World Cup in 2018 and 2022. That deal, estimated at $600 million, was a big symbolic win for the No. 2 network, and a sign of NBCU’s commitment (even at the risk of having the games be a loss leader). And NBC Sports’ new wide-ranging pact with NASCAR includes Spanish-lingo rights for Telemundo, which expects to score with coverage of the racing circuit’s events in Mexico starting in 2015.

Romano cites all of this activity as proof that the Peacock intends to make Telemundo a contender.

“The core of Telemundo Media’s mission is to be the best producer of original Spanish content for the world,” Romano says. “We are slowly but steadily building an environment that allows producers and talent relevant to the U.S. Hispanic market to bring new waves of ideas and different products to the screen.”