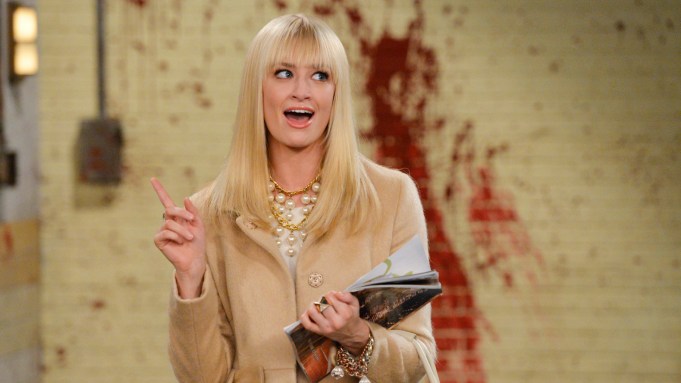 It’s getting harder and harder to decide what Julia Louis-Dreyfus should be most famous for.

You’d think her defining role as Elaine on NBC’s Seinfeld would seal the deal. Then came boffo notices for her lead performances on CBS mainstay The New Adventures of Old Christine and HBO’s sophisticated Veep.

But how about this feat, which somehow has avoided almost all recognition: Louis-Dreyfus, who will receive the inaugural Variety TV Impact Award at the Banff World Media Festival, is the only actor or actress to win lead or supporting comedy acting Emmys for three different shows.

Even she has trouble wrapping her head around that one.

“No, I have no perspective,” she says. “I feel as if it’s sort of happened to somebody else, to tell the truth. I’m honored, and yet at the same time, I haven’t really digested any of that. … I’m really just thinking forward about what the next project is or frankly, what the next scene is.”

In reaching the unprecedented trifecta, Louis-Dreyfus passed several of the people she named as her comedy inspirations, including Lucille Ball, Valerie Harper and Mary Tyler Moore. (Captain Kangaroo was another beloved figure from her childhood, by the way.) And it’s not because she was hopping from one new show to the next each year. Seinfeld ran for nine seasons and Christine five, before Veep launched in April 2012 and gave her the lead comedy actress Emmy five months later.

“I guess you could say they each had different kinds of meaning,” Louis-Dreyfus says. “For Seinfeld, I never thought I would win that, ever. I had lost so many times (four) prior to winning, and when I won it, I was shocked. And for Christine, it was a show that I was starring in (and the award) was in a different category — and the show was brand new. Veep is its own beast, completely different, unlike any of the comedies I’ve done.”

Louis-Dreyfus calls Veep a dream, saying that “if somebody had said to me, ‘What would you really want to be doing?’ I would really want to be doing a very funny, unusual comedy on HBO.” She remains amazed that no one had before centered a program around a character such as Selina Meyer, and the fact that satirist extraordinaire and In the Loop director Armando Iannucci was behind it only added to the magic.

“I loved In the Loop,” she says. “When I thought of the tone and the voice of that, mashed with an unhappy vice president, I felt I had to meet this guy. We met for a cup of tea (that) turned into a 3½-hour  meeting — it was so exciting.

“To be honest, I just felt I understood his tone, his voice. I liked him very much. He’s a very sort of gentle soul, and (he) seemed very collaborative.”

Such a comfort level has been non-negotiable for Louis-Dreyfus since long before her Seinfeld days, a lesson hammered home by her experiences on Saturday Night Live from 1982-85. Louis-Dreyfus had been a dedicated theater student at Northwestern, complemented by what she calls a lifechanging experience with the Practical Theater Co. in Chicago, when the producers of SNL recruited her and three others (Paul Barrosse, Gary Kroeger and Louis-Dreyfus’ future husband, Brad Hall) to join the show as writers and performers — all before her senior year in college.

“I was a high school student just a few years prior to that and watching Saturday Night Live,” she says. “It was just a head-spinning moment in my life.”

She credits SNL for teaching her how to become comfortable with live television, but the bigger lessons were about the business of entertainment.

“I learned the hard way, because I wasn’t very good at it. And I really came away from that experience thinking, ‘If it’s not fun, I’m not going to do it.’

“I had moments of having fun, but basically it was pretty hard back then for women on that show when I was on it,” she adds. “I was very green and very naive, and I did not go in with a bag of characters (or) arm in arm with a writer who knew my voice — I had to figure that out practically on camera. It’s not like I came out of SNL a big star.”

Louis-Dreyfus says she spent about a year without any jobs, then moved to Los Angeles for pilot season. She was cast in a pilot spinoff of Family Ties that didn’t go, but exec producer Gary Goldberg kept Louis-Dreyfus in mind for a show he later developed with Andy Borowitz, Day by Day.

That was 25 years ago, and she hasn’t really been out of work since. When Day by Day was canceled in 1989, it was around the time a series originally known as The Seinfeld Chronicles was materializing.

“I knew Larry David,” Louis-Dreyfus says, “because he was a writer on SNL my third year there. He didn’t get a sketch on the air, by the way, and we were both pretty miserable there and had that connection as a result. Years later, he sent me these four scripts. They had already made the pilot, and the network said they needed to add a regular female character.

“Frankly, in two of the four scripts, I had barely anything to do. … But the writing in all four was such a cut above and so not like anything else on television. It didn’t resemble what any network was doing. I’m not taking away from what network comedy was doing — Cosby was on at the time, and Cheers — but it was not like them. It had a different voice, skewed, with jokes that weren’t necessarily in your face. I thought, ‘This is pretty cool.’ ”

Post-Seinfeld, it has been one passion project after another for Louis-Dreyfus, and though they weren’t always as successful as Christine or Veep, she cherishes them. Watching Ellie, starring Louis-Dreyfus (with a lesser-known Steve Carell supporting) and created by Hall, was canceled midway through its second season, in 2003.

“I loved that show,” Louis-Dreyfus sighs. “Watching Ellie was I think ahead of its time. It was single-camera, and there weren’t very many of those then, and we did it in real time, (though) in the second season they kind of bullied us into not doing that. That really was a fun and daunting challenge to try to pull that off in every episode.We had an amazing cast. I just adored that show.  … It was a great sadness when it got canceled. You put your heart and soul into all these things, and it’s always sad when it ends.”

Louis-Dreyfus and Hall also recently made a short film that hit the festival circuit and aired on HBO, Picture Paris, that could portend an entry for the pair into indie movie territory, with a feature-length suspense project.

“It’s sort of nice to be able to take control, particularly in a business where you don’t feel you have control a lot of the time. God knows, it’s still hard — there’s all sorts of (challenges) with distribution and getting your film seen — but from a creative point of view, it’s very lovely.”

In the meantime, Veep offers Louis-Dreyfus plenty. For season two, concluding June 23, she says the creative team wanted to give Selina more responsibility and power while also peeling back layers on the other characters, learning more about their lives outside the office.

The show has momentum, and if anything, seems even better positioned for Emmy honors in 2013. If that happens, Louis-Dreyfus will just have to find a way to wrap her head around those awards as well.