Emmy parties: Steven Soderbergh Raves ‘TV Is Where It’s At’ 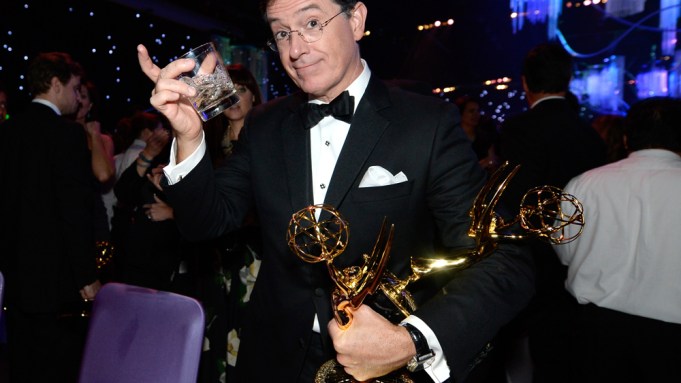 The Governors Ball got a jolt of manic energy when the “Breaking Bad” gang burst in fresh off their Emmy win for best drama series.

Aaron Paul seemed to be hugging everyone in the West Convention Center hall, which was draped in black velvet and day-glo colors to evoke an “Enchanted Evening” theme. Everyone wanted to shake Vince Gilligan‘s hand and congratulate Anna Gunn on her win. And there was much talk of the need to not divulge any spoilers about the series’ penultimate episode, which was airing just at the post-Emmy partying got under way in earnest.

Stephen Colbert (pictured) also grabbed the spotlight as he bounced around with a trophy in each hand.

Across town at Boa Steakhouse in West Hollywood, the AMC/IFC/Sundance team had to wait patiently for their “Breaking Bad” heroes to arrive but it didn’t dim the celebration, which attracted a mix of thesps and producers from “Mad Men,” “Rectify” and other shows.

When Jeff Daniels arrived at the HBO party at the Pacific Design Center, a cheer went up around the “Newsroom” tables, accompanied by a battery of flashlights.

Aaron Sorkin said the night belonged to Daniels although the other actors in the category were all strong. Surrounded by his other “Newsroom” stars – Jane Fonda, Marcia Gay Harden, Alison Pill and Hamish Linkater — Sorkin said: “He was the underdog. I saw Jane leap about six inches when his name was called.”

HBO topper Michael Lombardo hugged winner Michael Douglas while at another table Bobby Cannavale accepted congratulations. By midnight the glint of the golden Emmy lady could be seen all over the tent. Here were Stephen Colbert and Dan Bucatinsky, there was Steven Soderbergh, winner for “Behind the Candelabra” who was vowing off feature films. “TV is where it’s at,” Soderbergh said. “You saw what happened tonight. Something like ‘Breaking Bad’ would never happen in the studio system.”

After a handful of surprising losses in categories including best drama actor, the Netflix Emmy party was an understandably more quiet affair than its competitor counterparts.

Nestled on the rooftop of the London Hotel in West Hollywood, attendees took in the free candy and booze with a free panoramic view of L.A. The west end of the party remained about half filled, allowing for breathing room for those hopping over from the shoulder to shoulder packed HBO confab at Pacific Design center a few blocks down the street.

Reed Hastings wandered the party solo, offering supportive nods to talent as he made his laps. Kevin Spacey lounged near the poolside cabanas, American flag pin adorning his suit in the signature upside down “House of Cards” style.

Thesps who are only now soaking in limelight, including the women from “Orange Is the New Black,” were fan faves at the party, as Netflix subs and industry folk alike clamored for selfies with the actresses in the better-lit areas of the party.

For the second year in a row, Fox held its Emmy after-party at Soleto in downtown Los Angeles — and the event, per usual, was packed with familiar faces, including most of the “Modern Family” and “Homeland” casts. Gary Newman and Dana Walden, 20th Century Fox TV toppers, toasted Claire Danes on her back-to-back wins for lead drama actress, and cheered the record-tying streak of “Modern Family” for best comedy (four in a row, catching “Frasier’s” record).

Julie Bowen tucked herself in the back, while castmate Eric Stonestreet made the rounds.

The event, on a whole, had a much more chill vibe (planners decided to forgo this year the white plush carpet that wrapped around the building at last year’s party). Still, the event got pretty crowded as the night progressed.

Claire Danes showed up later with hubby Hugh Dancy. Her young “Homeland” co-star Jackson Pace waited patiently in the crowd for a chance to speak with the drama-actress winner, while Damian Lewis was seen milling about nearby.