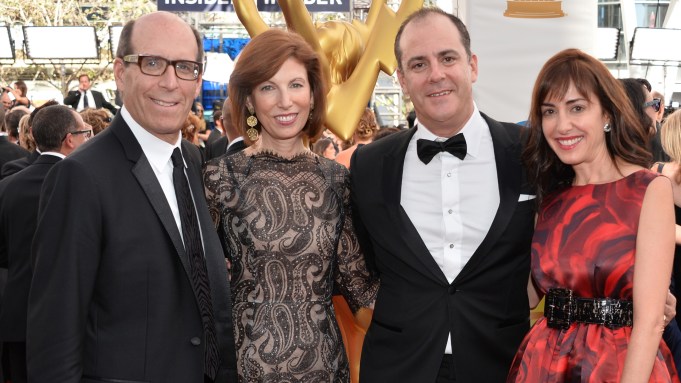 The vast expanse of the television biz flooded down the red carpet outside the Nokia Theater as bizzers assembled Sunday night for the 65th annual Primetime Emmy Awards.

Netflix content chief Ted Sarandos and Netflix programming VP Cindy Holland were new hot shots in the parade this year. Cable execs like A+E Networks Nancy Dubuc also commanded considerable attention from industryites on the carpet, in a sign of where so much of the activity in TV is these days.

Even TV Academy chairman Bruce Rosenblum was there in a different incarnation this year. He’s leading the charge for TV production at Legendary Entertainment, a company that has made inroads in showbiz through unusual financing structures.

“It’s a great time to be in the business,” Rosenblum said of the TV biz overall as he schmoozed his way into the Nokia Theater on Sunday.

As always there were traffic bottlenecks and awkward collisions on the carpet, and even some of those underscored the changes in the biz.

When AMC TV chief Charlie Collier was asked to move aside to make room for a photo of Fox TV Studios chief David Madden, Madden quipped “first ‘The Killing’ and now this?” — a reference to the FTVS-produced series that was axed by AMC after its third season aired on the cabler and Netflix.