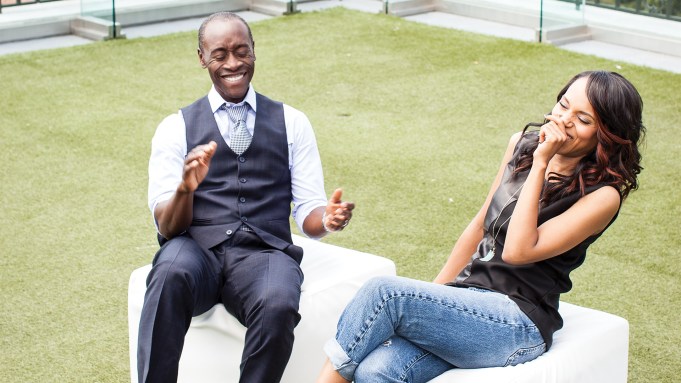 Stars in television and film, Don Cheadle and Kerry Washington talked frankly with Variety about life and work in the industry, issues of gender and race, and the role of activism. Excerpts of the conversation appears below, but watch the full video above.

When people reference your race when describing your career, is that a point of pride, or is it something that you think is overplayed in the media as part of your story?

DC: I think I’m somewhat defined by my race for sure, and I’m good with that and I actually want that to be a part. … I think that should be fodder for our work — we should use all aspects of ourselves. I’m always trying to find a place where that’s actually an impact on what I’m doing as opposed to going, “Well, we’re all just people and we’re the same.”

How would you compare racism to sexism, for example?

KW: It’s difficult to say, to be honest. Probably the most sexist decisions that get made about my career are decisions I don’t even know about, because — and I think it’s the same issue with race — we don’t even know when decisions are made that are discriminating, because we don’t even have access to hear when that happens. But I also feel like I’ve been able to do things as a woman in this business that I wouldn’t have had the opportunity to do as a man, just like with race, like be able to play Ray Charles’ wife if I wasn’t a black woman. So it sometimes makes things more challenging, but has also allowed for unique experiences like Hotel Rwanda and Ray and The Last King (of Scotland), roles that really use our gender and our race.

DC: I think it’s sort of like a sine wave — it depends on when you ask the question. If this was 1971, we’d say, “Oh, there’s tons of opportunity for black people in movies — I don’t know if you want to be in all of them” but you’d be like, “Yeah, I had five auditions today.”

KW: That’s huge right now, and different. I think you’re really right. I think there’s that curve, but I do have a sense that it’s curving upwards and that I have more opportunities than Josephine Baker and Lena Horne and Diahann Carroll had. … This is a business where, if you’re looking for consistency and dependability in your work, this is not the career for you. But I think as more women are in positions of power, more people in color are in positions of power, the stories become more inclusive, the casts become more inclusive.

Looking back on your own careers, what was the ebb and flow like and what was it like trying to get started?

DC: It’s so funny: Kerry and I did a movie a long time ago called The United States of Leland, and I was looking at the cast list of that movie.

DC: You know, all people that are still working, which is pretty fascinating. But I came out of school — I graduated in 1986 — in a time when those great TV shows, L.A. Law and Hill Street Blues and all the comedies that were on TV, and (for) all of those roles and guests spots you could get as a no-name actor that had no track record, no resume. If you were good, you could get that shot. Those shots are all being filled now with people who have name recognition. And that’s tough. People come up to me now and ask me, “What can I do to start?” and I have no idea. When I started acting, I walked into a room with a casting director; I met the producer, the director. Now they go in a room and there’s a camera in a corner or they’re taping themselves at home (and) emailing them in, and that’s just antithetical to the way I — I don’t even know how to start now. I count myself very fortunate. I don’t think I’m “there,” quote unquote. I always feel like it’s a grind.

KW: I actually think that attitude is what keeps the actors that are consistently working actors, that’s what keeps you in the game. … If you look at someone like Diahann Carroll, if you ask someone who Diahann Carroll is, it depends on how old they are. People of my generation or younger are like, “Isn’t that Whitley’s mother from A Different World?” Or people from my mother’s generation will give you Julia. In between, there’s Agnes of God and Dynasty. … People like Rita Moreno and Julie Andrews, Barbra Streisand keep reinventing themselves. They directed, they produced film and television and theater. We are constantly willing to work in all different mediums because you just want to work. People want to work. It’s about the work … it’s about continuing to grow as an artist and as a craftsperson.

How much credit does the entertainment industry deserve in creating a climate that allows, for example, someone like NBA center Jason Collins to be comfortable outing himself in this day and age? Do you think the entertainment community and what’s been produced has helped make that happen?

KW: I always feel like it’s important to differentiate between news media, that part of the business, and the entertainment arts part of the business. I think that images in film and television and theater, they give people the opportunity to move into a comfort zone with an idea that they may not feel entirely ready for in their own lives. I think it means something that we were watching a black president on television years before that was actually able to happen in the real world of the United States.

DC: I had an interesting talk with a woman. I was in Vegas, we were shooting. Very early in the morning I came downstairs and she was using the buffer (on) the floors. She was a black woman and she said, “Hey, can I talk to you for a second?” And I said, “Yeah,” and she said, “What’s going on with your son in (House of Lies)? What’s with him? Is he gay, or what? What’s the situation?” I said, “He hasn’t made it known to anyone necessarily what he is.”  He said in one episode, ‘Dad, what do you do when you like a boy and a girl?’ and I said, ‘I don’t know.’ I don’t know that he’s gay, I don’t know if he’s thinking about transgender, if he’s just in that gender fluid identity that almost the entire generation of his age right now is dealing with.” … And she said, “Well, how do you think you should deal with something like that?” I said, “Well I think you just love them. I mean, Marty just loves his son. You just love them.”

DC: And she said, “You know, ’cause my daughter is gay, and she’s going through a lot of drama, people messing with her and stuff at school, and I just love her and I just want to know if you guys are ever going to really deal with that and how you were going to deal with that.” … So yeah, in other conversations I’ve had with people, they let me know that when you strike the right nerve in the right place, you can’t anticipate how the reverberations are going to happen out there. But it’s nice when it’s not just something that you’re doing on TV to entertain, but when people are really bringing it to themselves.

DC: I had a poker tournament that I did at the World Series of Poker that we did for three years or four years, that made a lot of money for the human crisis in Darfur, and other things that I’ve been a part of. You’re there because you can draw focus and attention and attraction, but really what you’re (trying) to do is go, “That’s the expert, that person really knows a thousand times more than what I do about this issue and these are the people who it’s about. Yes, I would love to talk about Iron Man with you, but I want you to talk to them about their thing.”

I’m trying to pass the ball like Brad Pitt was saying: “We can’t get out of the light, and they can’t get in the light.” So, we’re trying to use that bounce and go, “Oh you’re looking me? Bing! Now go look at that.” … A lot of it is frustrating to me because — and I see (this) when I get the feedback from the organizations I work with — when I pull out of it, a lot of times that whole energy gets sucked out of it, too, and now it’s hard to get that issue back in the press. No one is talking about Darfur right now.  … I come back sometimes looking at it and go, “That was great for that little moment, but what have we really done overall?”

KW: It’s one of the reasons I feel like it’s so important when we do this kind of work to shine the light on the organization but to also encourage our fans to become involved, because that’s what it requires: the ongoing momentum of people being involved. For me I remember a point when — I come from a family that is pretty politically active and politically engaged — and for me there was a point in my career where I thought, am I going to have to stand back and not be involved because I’m in the public eye?

DC: Because you thought people would go, “Shut up, you’re just a celebrity.”

DC: Which does happen.

KW: All the time, but I said, “No, I participate because I’m an American, and I live in a democracy that needs me to participate.” So I can’t stand back and let go of my responsibility because I’m an actor, but the hope is that other people will know it’s their responsibility to also participate, because if they want to be like us in these other ways — in terms of what shoes are they wearing and where are they going on vacation, what are they eating, what all the weekly magazines are telling you — then they should also want to be engaged with their friends and want to do something more meaningful. So you hope that example is part of what comes out of it.