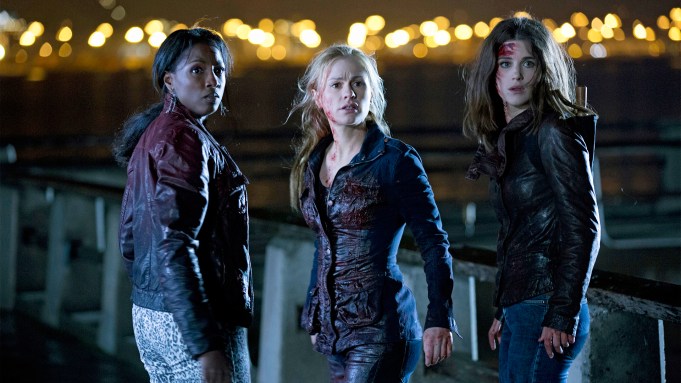 Fans lined up in the thousands on Saturday to see their favorite vampires, faeries, and mediums from HBO’s racy hit drama “True Blood” when they arrived at Comic-Con for the sixth time.

Moderator Kate Hahn from TV Guide first treated the fans to a special sneak peek of the second half of the show’s sixth season. Though most of the details flashed by to fast to discern the context of what was happening, what did appear clear was that Bill (played by the absent Stephen Moyer) will become conflicted about his allegiances because of his new godlike power, and Eric (also absent Alexander Skarsgaard) will continue to be held captive in the vampire research camp that he, Tara (Rutina Wesley), Pam (Kristin Bauer van Straten), and new progeny Willa (Amelia Rose Blaire) are currently being detained in.  Sookie (Anna Paquin) will also continue to deal with conflicted emotions regarding her feelings toward  the mysterious new character, Warlow (Robert Kazinsky).  And Sam (Sam Trammell) will evidently continue his relationship with new character Nicole (Jurnee-Smollett Bell), who is a civil rights activist, of sorts, for all supernaturals.

Buckner, who recently took over showrunner duties from Alan Ball, was asked how his new role differs from just being a writer on the show.

“I had no idea how hard he worked … I’ve never had more respect for Alan,” Buckner answered.

Though Buckner couldn’t go into a ton of detail about how the season would end, he did provide information about where the show will go in general after the current season’s plots are concluded.

ALSO AT COMIC-CON: Superman and Batman to Team Up in Movie

“You’re going to feel that the show is going to return back to its roots … It will be about this group of people living in Bon Temps,”  adding that he intends to condense the storylines, and that it will feel like “we’re coming home.”

This revelation was met with praise from the fans who are currently following at least one distinct storyline per character on the show.

Hahn attempted to get more detail about what the fate of certain characters would be for the remainder of the season, but the cast often couldn’t elaborate in any kind of substantial detail.

“I don’t like that everybody’s upset at my character,” Manganiello admitted.

ALSO AT COMIC-CON: ‘World of Warcraft’ Movie to Film in 2014

Woll offered some insight into her character’s current plight by stating, “I don’t think she wants her friends to die; she’s at a place right now where she’s pretty low,” and added that her character probably didn’t mind if she died.

“Well, she’s not being anyone’s doormat,” Paquin said of her character’s evolution over the course of the series, adding that Sookie has become increasingly distrustful of everyone, which will inform her feelings for Warlow.

Bauer van Straten implied that her character wouldn’t be overjoyed at the discovery that her maker created a new progeny, noting that Pam “doesn’t play well with others.”

In the end, the most telling revelation was Buckner’s assertion that, despite the existence of vampires, mediums, faeries, witches, panther people, maenads, and a myriad of other creatures, moving forward , the show will refocus on the relationships between vampires and humans.

“I actually want to bring it in a little bit … My hope is to get all these people we love to be living under the umbrella of one story and one thread,” Buckner claimed, representing a stark deviation in the multi-thread storytelling technique that has dominated the show for the past several seasons.

The show was recently renewed for a seventh season, but no premiere date has been set.